Ruto-I wasn't going to let Raila take over from Uhuru

The DP said he used to wake up and hold 3 meetings before Uhuru woke up.

• The DP said that there was no way he was going to let Raila Odinga take the presidency away from Uhuru. 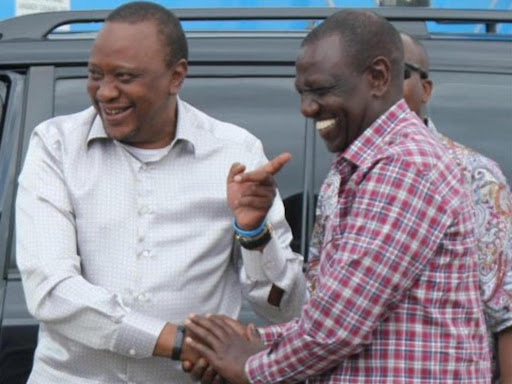 Ruto with Raila in the past
Image: The-Star

In a leaked recording, Deputy President William Ruto again outlined the events that gave rise to his recent controversial remarks where he said how he almost smacked President Uhuru Kenyatta.

The DP declared on Monday at Kithirune, Central Imenti, in Meru County that he had no intention of allowing Raila Odinga to usurp Uhuru as president.

This roughly translates to, "Even if I made Uhuru Kenyatta President, would there still be a problem? Supporters of Azimio ought to stop this nonsense. They are spreading a recording saying that Ruto forced Uhuru to be president. If you were me, would you have accepted Uhuru to abandon us with the way we had pushed him?"

The Second in command added that he campaigned for Uhuru in his 2017 presidential bid more than the president.

"I used to wake up, hold three campaigns before the President woke up because he was my friend and there is no way I would let Raila take that seat away from him," Ruto added.

He asked if Azimio supporters wanted the people that had woken up at 4 am to vote for Uhuru's re-election to let their efforts wash away.

"We are the people who woke up early to vote for the President. People of Meru would you want me to allow Uhuru to leave the seat we had given him for Raila?" Ruto posed.

His clarification follows a leaked audio in which the DP is said to have claimed that he would have slapped President Kenyatta had he not been the President.

This was because Uhuru wanted to abandon the repeat elections after the Supreme Court nullified their win.

The alleged remarks of the DP have attracted numerous criticism from Azimio leaders and a section of Kenyans.

The Azimio camp has also leveraged the remarks in campaigning against the DP.

This is not the first time that Baby Uhuru has been seen in public, when he was a year old he was spotted at the Lewa Conservancy during the popular ...
Politics
1 month ago
WATCH: For the latest videos on entertainment stories

'We have no money to waste on side chics! Kenyans tell Uhuru