• Ruto and Uhuru have been at odds since the president and Raila went through the 'handshake'.

• Ruto told a section of Kikuyu elders that he wanted to slap Uhuru in 2017. 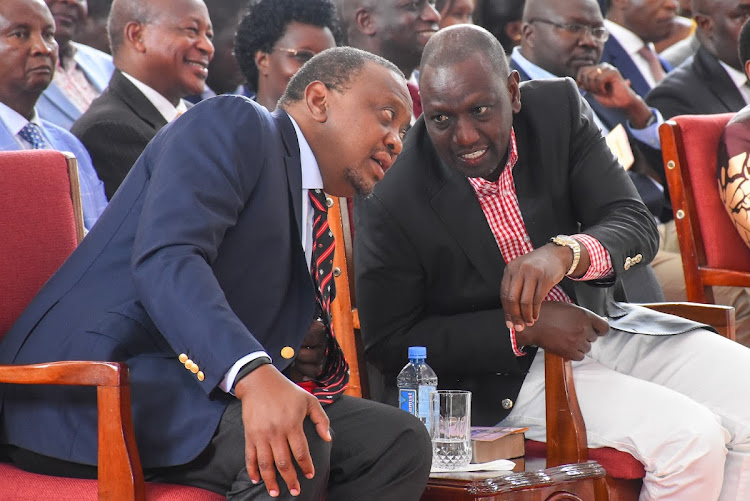 Uhuru with Ruto at a past date
Image: The-Star

Uhuru was so upset by the decision, according to Ruto, that the President almost decided to give up and withdraw from the race in order to return to his home in Ichaweri.

This is according to an audio recording obtained by The Nation from a meeting between Ruto and Kikuyu elders on Friday, July 1, at his Karen residence.

Ruto said that he almost smacked his boss during his speech to the elders when the latter hinted that he wouldn't run in the 2017 rerun elections.

"'We should give up on this,' the President adds, 'Adding that he does not want to participate in the rerun elections and instead wants to travel to Ichaweri,'" his hometown in Kiambu County.

"When I saw him, I said, 'You!' If I hadn't been acting respectfully, I would have given him a hard slap. How could we simply give up?" Ruto declared.

Ruto also claimed that he was the one who persisted in pleading with Uhuru to run in the repeat election since there was no possible way the Jubilee party could have lost.

"I assured him that we could not simply give up after winning the election. There were more senators, governors, and MPs. We had put in a lot of effort, he said. Kiama Ka Ma Captain (Retd) Kung'u Muigai, Rigathi Gachagua, Speaker of the National Assembly Justin Muturi, Gatundu South MP Moses Kuria, and his Kikuyu counterpart Kimani Ichung'wa were among those standing at Ruto's sides."

Why Wajackoyah has the power to rain on Ruto and Raila's parades
Politics
1 month ago
WATCH: For the latest videos on entertainment stories