Not a deadeat! Tanasha praises Diamond for being a good dad

Earlier on, Tanasha said Diamond was a deadbeat dad

• In June this year, Diamond visited Tanasha's son in Nairobi and spent time with him in the absence of his mum Tanasha something that wowed their fans.

• Tanasha said Naseeb Junior's dad Diamond is trying his best to be present and to be supportive to their son. 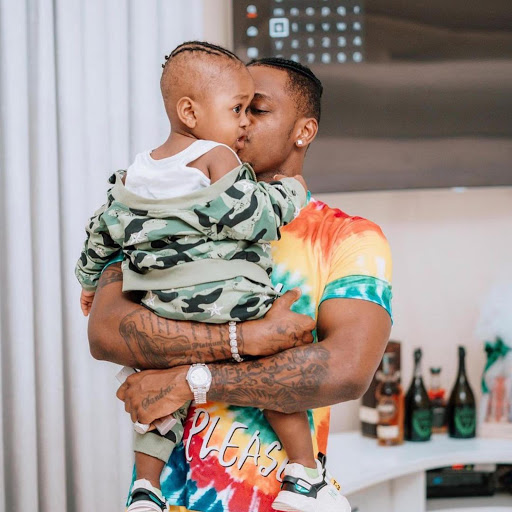 Diamond with his son with Tanasha
Image: Courtesy

Tanasha Donna has praised her Tanzanian baby daddy Diamond Platnumz for agreeing to be present in her son's life.

Speaking to Kiss FM yesterday, Tanasha said Naseeb Junior's dad is trying his best to be present and to be supportive to their son.

"Honestly it is not bad I mean he’s trying to be a good dad and I have to give him credit for that."

In June this year, Diamond visited Tanasha's son in Nairobi and spent time with him in the absence of his mum Tanasha something that wowed their fans.

Tanasha also spoke about being a single mum saying that it is not easy.

She however, said that she is proud of being his mum since he has given her a purpose in life to continue working hard.

The mother of one said being a parent is one of the best thing that has happened in her life.

"Being a single mum is not easy because you are juggling a lot of things you know," she said.

"You are trying to pursue your career and you are a mother at the same time. You and the father are separated even though he is still in his life but you are separated, but obviously it is a hustle.

It is one of the best things that’s happened to me. It is a beautiful thing at the same time honestly I could not imagine my life without my son, ’cause he’s what drives me now."

Tanasha who celebrated her 27th birthday early this month said her goal and dream is to make a million dollars before she turns 30 years.

"I have invested in something ’cause I have realized that I am passionate in music but I’m really starting to get into business and becoming an entrepreneur and a businesswoman. I’m trying to tap into real estate something is on ground that I don’t really show on the public."

“Making people dance is one of my favourite things to do,” says Krizbeatz of the song’s hypnotizing bounce, contagious drums, and summer warmth.
Entertainment
6 months ago

Why mom has never met my son - Tanasha

Tanasha continued, "Can you imagine, my mother has never met my son? I don't want to start tearing up..."
Exclusives
6 months ago

Nigerian singer Omah Lay back musically after personal problems
Entertainment
6 months ago
WATCH: For the latest videos on entertainment stories

Tanasha shows off her expensive fragrance

Celebs who were snubbed on Fathers day 2022