Guliye said if Raila was not to be announced a winner, a run-off should have been forced.

•In an affidavit responding to a petition filed by ODM leader Raila Odinga and his running mate Martha Karua, Guliye disclosed that the meeting occurred at 3 am, Monday, August 15. 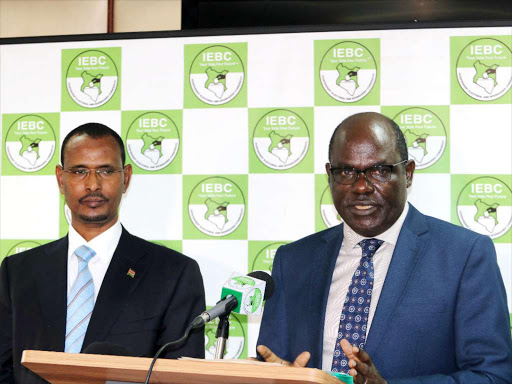 Abdi Guliye with Wafula Chebukati The commissioner has claimed that his boss was visited on the day he announced the results
Image: The-Star

Wafula Chebukati, the IEBC Chair met a host of leaders affiliated with Azimio la Umoja coalition on the morning of the day the Presidential results were declared, IEBC commissioner Abdi Guliye has disclosed.

In an affidavit responding to a petition filed by ODM leader Raila Odinga and his running mate Martha Karua, Guliye disclosed that the meeting occurred at about 3 am, Monday, August 15.

Chebukati announced the presidential results on the same day around 5:30 pm.

"About 3 am on the morning of August 15, the chairperson was visited by Raphael Tuju, senator Amos Wako and Advocate Kyalo Mbob," Guliye said.

He said the chairperson called all the commissioners to join him to engage the visitors.

"When all the commissioners arrived, the meeting was commenced by the chairperson by inviting the visitors to state their issues," he said.

"Wako indicated that they had come to ask the commission not to operate 'in a vacuum' and that it must consider the link between the election results being declared and the stability of the country which he described as 'the bigger picture'."

According to Guliye, Wako told the commission that in his term as Attorney General he also served as the election supervisor and in that capacity, he would moderate results guided by the need to achieve law and stability in the country.

Guliye said Tuju on his part told the commission that it was necessary for the results to be moderated in Raila's favour.

"Tuju indicated that it was necessary for the results to be 'moderated in favour of baba' and that on the contrary declaration of results would 'plunge the country into chaos,'" he said in the affidavit.

"As an alternative, he suggested that in the event it was not possible to declare 'baba' as the president-elect, then the commission should force a run-off. He said that should his request be granted, it could be adequately awarded."

Wafula Chebukati has allegedly removed all the other commissioners from the commission's WhatsApp group.
Politics
1 month ago

4 candidates who could replace Matiang’i