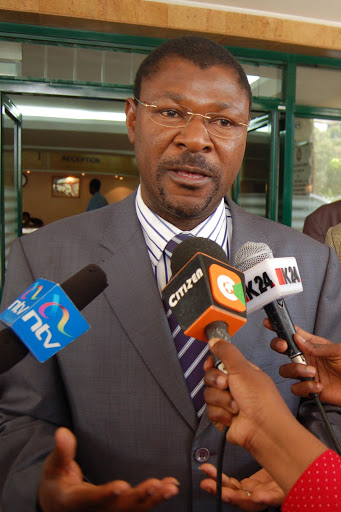 Bungoma County Senator-elect Moses Wetang’ula has trashed the Azimio la Umoja petition that was presented at the Supreme court by their legal team saying that it has nothing to be ruled over.

“I am a senior lawyer I have gone through and reviewed the Azimio petition that is pending before the Supreme Court. It has no agenda and it failed on arrival,” Wetang’ula said.

Speaking at Kibabii University grounds on Thursday during the swearing ceremony of Bungoma governor Ken Lusaka, Wetang’ula lauded Bungoma voters for choosing the Kenya Kwanza leaders and re-electing Lusaka as the county chief.

“I want to thank you all for your unanimous support towards our Kenya Kwanza candidates including William Ruto, we are very sure and optimistic that the Supreme Court is going to uphold Ruto as the President-elect,” he said.

He added that Bungoma is now respected for delivering victory towards Kenya Kwanza Presidential candidate William Ruto and a devastating blow to Raila Odinga.

“The people who have made Bungoma appear on the bad list have now left, no ferrying and paying them with government money to go to the funerals to throw stones and heckle people. With the Lusaka administration the country will be streamlined,” he said.

However, Wetang’ula argues that Ruto defeated Raila Odinga fairly and they should stop complicating issues that accept failing and allow President Uhuru Kenyatta hand over power to Ruto.

“We are not even interested in what the Azimio la Umoja supporters are trying to do at the Supreme Court, we are just waiting to swear in Ruto as the next President of the republic,” Wetang’ula added.

Wetang’ula said that the Kenya Kwanza team trusts in the court process saying that they won’t allow a few people to intimidate the work of the Court.

“We trust in our Chief Justice Martha Koome, let’s give her ample time to throw out the petition and give a neutral ruling,” he said.

His sentiments were echoed by Webuye West MP elect Dan Wanyama who said that the Azimio team has no plan for the country.

Sakaja is the current Nairobi Senator and an aspiring Nairobi Governor.
Politics
2 months ago

Kenyans On Twitter Are After Wetangula And This Is Just Too Funny!

Kenyans On Twitter Are After Wetangula And This Is Just Too Funny!
Entertainment
7 years ago
WATCH: For the latest videos on entertainment stories