• Allan Makana manouvered his way to the podium, asking the archbishop to allow him to address the nation.

• On receiving praise from members of the public, Muheria says such an act should be seen by all people and not only the clergy. 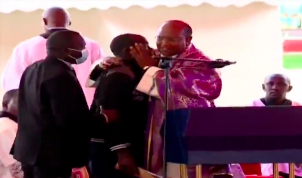 Nyeri Archbishop Anthony Muheria won the hearts of many Kenyans on Friday after showing his mercy to Allan Makana; a man who claims to be Kibaki's grandson.

Speaking on the ordeal, the Archbishop who is the main celebrant at Kibaki's burial service said he was compassionate to 'Kibaki's grandson'  as the holly spirit guided him.

"It is an incident that happened and we do not foresee these things but we handle them as the holy spirit guides us at the moment. I think it was a young man who was a bit emotional and I really hope that he is looked upon with mercy and someone attends to him," the Archbishop said.

On receiving praise from members of the public, Muheria says such an act should be seen by all people and not only the clergy.

"I just think it is what we should do as Christians even in functions of that caliber. we should not lose touch with who we are and people who are needy. It shouldn't be a surprise, all of us should be able to show a gesture of mercy whenever an occasion like that appears," he added.

During the state funeral held at Nyayo National Stadium, Allan Makana maneuvered his way to the podium, asking the archbishop to allow him to address the nation.

When security officers charged towards him, Archbishop Muheria embraced the man, asking the officers not to mistreat him.

“He is a son of our nation who is emotional at the loss of a President, treat him well,” the Archbishop said before proceeding with the mass.

On Tuesday, Allan Makana had caused drama at parliament buildings while seeking an opportunity to view the body of Mwai Kibaki, who was lying in state there.

An emotional Allan said that he was a grandchild of the late former President, and he wishes to view his body and bid him goodbye.

Mwai Kibaki passed away after a 3 year battle with illness.
Politics
3 weeks ago