• Harrison Mugo was captured in a viral video in what seemed to be an intoxicated state.

• His wife said that he changed after the death of their son that happened in 2019. 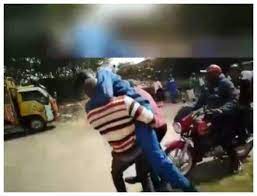 A screenshot of the late Harrison Mugo on July 4th
Image: Courtesy

New details are coming out about the story behind last week's viral video of the late police officer, Harrison Mugo, who was captured drunk and disorderly while in uniform.

According to his widow, Judy Wambui, Harrison had suffered from depression after the death of his son.

Wambui who was speaking to Nation said that the late Harrison was a caring father and family man who had changed after the incident.

The late Mugo's son died in 2019 after he was involved in a road accident during a school trip in Nanyuki with Mugo falling into depression and leading him to the bottle.

“Whenever he was home, he spoke about our son. It really affected him, It seems he found solace in alcohol,” the widow said.

Mugo would, later on, take his own life days after a video of him in what seemed to be a drunken state along Jogoo Road emerged.

The incident which was wildly reported and caught the attention of police Inspector General Hilary Mutyambai caused Mugo to be summoned for misconduct.

According to a police report filed at the Buruburu Police Station where he was based, Mugo was found dead at the police canteen on Thursday, July 7th at around 6:30 am.

“The body had no visible physical injuries and no suicide note was found,” police report said.

The National Police Service (NPS), came out to condemn the constable’s behaviour as unbecoming, unacceptable, and unprofessional.

The Bruno Shioso-led body further announced that disciplinary action was being taken against him.

Sheila Too gets upset as a female reveler tells her she has no right to touch her phone or any other personal effect.
Lifestyle
1 month ago

Why I shot my boss - Naivasha police officer

In a psychiatric report, Corporal Joseph Kamau admitted to using alcohol frequently due to stress at home.
Crime
7 months ago

Policewoman who took her own life cremated

A policewoman who died by suicide was cremated at a private event in the city amid calls by colleagues to address the rising trend in the service.
Lifestyle
2 months ago
WATCH: For the latest videos on entertainment stories