The singer is not bowing to outside pressure

• Nadia Mukami held her first show six months after she gave birth to her son Kai.

• Nadia wore a body suit that some of her fans thought was not fit for her ending up hating on her post. 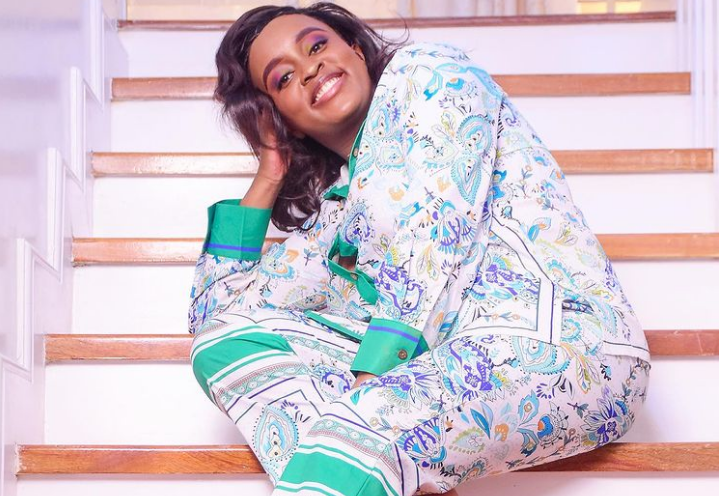 Singer Nadia Mukami on Monday responded to trolls who hated her recent dress code during her recent show that took place in Meru over the weekend.

Nadia wore a body suit and her fans spewed some venom on her post online with some condemning her stylist. Let's not forget that this was her first show 6 months after she gave birth to her son Kai.

One fan, for example, wrote; "Your stylist should be sued asap." Another one wrote; "Sijui bodysuit ndio ni ndogo ama aanywayss wuuuuehhh."

Nadia took to her Insta stories to talk to her haters with the mother of one saying that most female artistes go through such trolls after giving birth.

She noted that haters will never give her a reason to give up and promised to even work harder.

"Now that I got your attention with the outfit, the event was successful. I am not a woman who gives up, I work hard. It is even harder when you have given birth, and you are a female artist. I alone, understand what I have been going through. It is challenging I have addressed the issues female artistes go through after giving birth."

This is not the first time Nadia has been trolled online. In 2020, Nadia took a break from social media hours after being insulted and bullied online.

In an Instagram message she posted on her page, Nadia said April has been a very tough month for her as she had to deal with constant cyberbullying. Nadia said she was tired of it all and wanted to take a break from social media.

"Am writing this with tears in my eyes and they are already swollen because of crying! I know they say I am a public figure, I need not show emotions; I will show my emotions," she wrote.

"There isn’t an insult I haven’t received, all levels of explicit insults. This has been a month of one heartache after another, I swear I have broken down. I am always the strongest among my friends; they say God doesn’t give you something you can’t handle, I wish he didn’t trust me this much every time!! Am taking a break, I will be back!”

Nadia Mukami-I paid Arrow Bwoy to perform on my birthday

Nadia Mukami reveals why she stopped working out

Nadia Mukami- "There is no need for me to pressure only for me to go back through surgery."
Entertainment
1 month ago
WATCH: For the latest videos on entertainment stories

Nadia Mukami opens up on being a celebrity mum

Sometimes I wondered if I am a good mom-Nadia Mukami