The Ministry of Devolution has told the governors to send their messages through social media instead.

• The move is to help down on costs and to stop over stretching the County's budgets.

• Governors have been told to use social media to send congratulatory messages instead of using people's tax to pay for adverts to send the same. 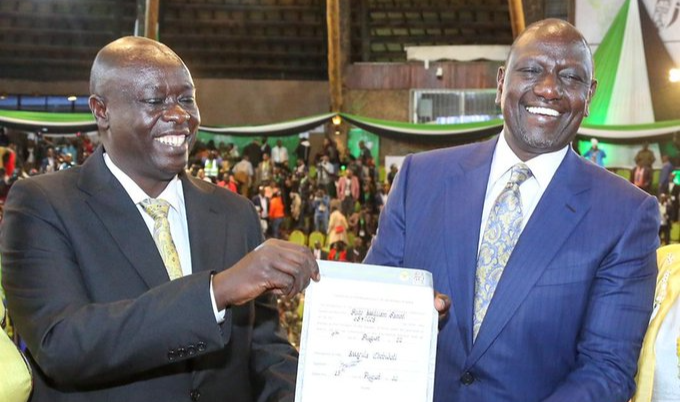 President Elect William Ruto and his deputy He has advised governors to stop paying for adverts on newspapers to congratulate him and his deputy Rigathi Gachagua.
Image: Twitter

Governors have been put on the spot for using County cash on paid adverts to congratulate President-elect William Ruto and his deputy Rigathi Gachagua.

The Ministry of Devolution has told the governors to send their messages through social media instead.

This is to help down on costs and to stop over-stretching the County's budgets.

In a statement on September 7, the ministry noted that Governors have been sending expensive congratulatory messages to the new leader, and it may burden the counties financially.

"Following this pronouncement, leaders from across the Globe have continued to send congratulatory messages to the President-elect and the Deputy President-elect.

Among the messages received, are those from the County Governments, both on social media and in the Daily Newspapers. It is noted that these adverts are expensive and risk creating a financial burden to the Counties involved,” the statement said.

The ministry reminded Governors that "public money shall be used prudently and responsibly."

“In light of the above and also in line with advice from the President-elect, these congratulatory adverts are hereby discouraged with immediate effect. Counties wishing to send congratulatory messages are encouraged to explore cheaper alternatives such as social media,” it said.

The letter insisted that the behavior MUST stop.

“The new administration desires to give Kenyans value for their money. The purpose of this letter, therefore, is to direct that all Counties immediately desist from procuring extravagant congratulatory advertisements,” Read the letter

Some governors are guilty after paying for full paged adverts to congratulate Ruto and Rigathi after the Supreme court upheld their win.

William Ruto and Uhuru Kenyatta have talked about the just concluded General Election and the transition as envisaged by our democratic tradition and ...
Politics
4 months ago
WATCH: For the latest videos on entertainment stories