The results are as captured in Forms 34As.

• The IEBC chairman also informed the media that only 73 polling stations have not submitted their Forms 34A. 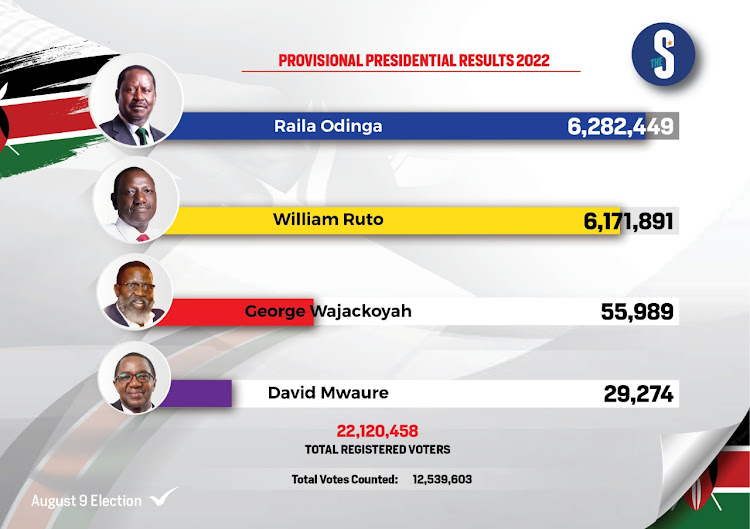 The presidential results at the moment

Presidential results started trickling in on Tuesday night as tallying of votes from over 46,000 polling stations across the country continued.

Over 14 million Kenyans went to the polls on Tuesday, August 9 to elect leaders across six elective seats.

The results are all official as declared at tallying centres by presiding officers and captured in Forms 34As.

The IEBC chairman also informed the media that only 73 polling stations have not submitted their Forms 34A.

In an update on Thursday, Chebukati said a detailed report will be given later in the day.

"We shall give a report on those that have transmitted later today," he said.

His update comes about 30 hours after the commission closed elections. So far, 99.84 percent of the 46,299 polling stations have submitted the images of the forms.

Among those stations that have submitted their results include those where a manual register was used to identify voters.

They include 84 polling stations in Kibwezi West and 154 stations in Malava, Kakamega County.

The commission had allowed the use of the manual register after Kiems kits failed to function in the areas.

Wafula Chebukati, the IEBC chairman has urged the public not to panic as a result of varying results being relayed by various media houses.
Politics
1 month ago

IEBC chairman Wafula Chebukati crashed many Kenyan hopes today when he said that the commission will not declare the results of the
Politics
1 month ago
WATCH: For the latest videos on entertainment stories