"Each is using is own criteria and sequencing among other factors."

• He explained that the variation has been brought about by the fact various media houses are accessing the portal at different times and using their owns sequence in tallying the results.

• "At the end of the day, the results will be harmonised because they come from the same source," he said. 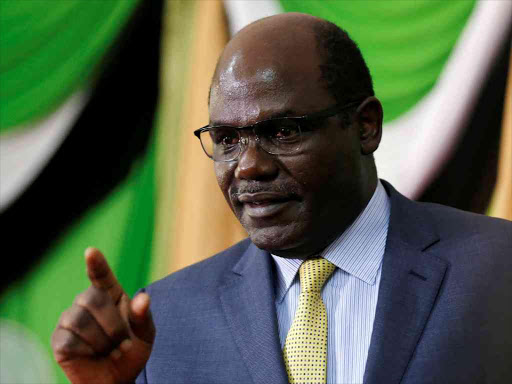 Wafula Chebukati, the IEBC chairman has urged the public not to panic as a result of varying results being relayed by various media houses.

He explained that the variation has been brought about by the fact various media houses are accessing the portal at different times and using their own sequence in tallying the results.

The commission chair said that he had hoped that media houses would join forces and set up one tallying centre for uniform results but that has not been the case.

"At the end of the day, the results will be harmonised because they come from the same source," he said.

"The results may vary because each media house is accessing the portal and downloading the forms at different times. Each is using its own criteria and sequencing among other factors," Chebukati said.

"But I just want to inform Kenyans that the final announcement and declaration of presidential results will be done by the national returning officer here at Bomas. We hope by the end of the tallying they will be harmonized and they will look similar because the results are coming from the same source. So there should be no panic about the differences we are seeing on the medial houses because their approaches may not be the same."

'I will get more money, niingie kiti!!' Crying Meru mhesh vows after voters played him

Festus Kithinji, an aspiring MCA in Meru was left in tears after no one voted for him. This despite him using all his resources to campaign and help
Politics
1 month ago