The 68 acres on which these sacred grounds sit had fallen into the hands of some unscrupulous individuals. - Uhuru 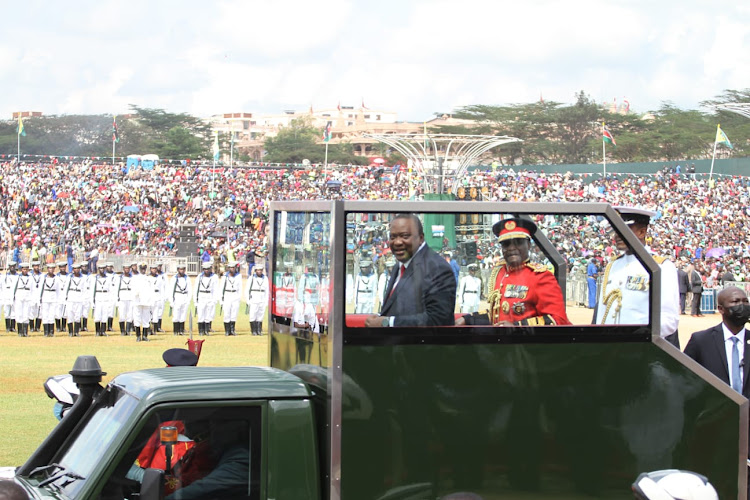 In his speech, Uhuru highlighted why the newly renovated Uhuru Gardens what his venue of choice for the 59th Madaraka Day celebrations.

"I am overjoyed because, after 59 years of self-rule, this is the first time we are celebrating Madaraka Day on these hallowed grounds.

Madaraka Day is significant in our history because it is on this day in June 1963 that the Founding Fathers of our nation replaced the outgoing colonial government and formed the first indigenous Government of Kenya.

And with this act, we achieved self-rule or Madaraka, with Mzee Jomo Kenyatta as our first Prime."

Uhuru gave Kenyans a history lesson via his speech.

"On these grounds sat one of the largest concentration camps in colonial Africa, holding up to 10,000 freedom fighters at any one given time.

Many of our compatriots were tortured and maimed for life in that camp.  And many more unknown heroes died in this field.

The horrors of this camp are what inspired our Founding Fathers when they taught us that ” …the tree of freedom must be watered by the blood of our patriots”.  And that is why on Jamhuri Day in 1964, we planted a mugumo tree standing to my right, as a solemn and symbolic reminder of this eternal truth.

Although the colonizers killed the messengers in this camp, they could not kill the message.  The liberation ‘fever’ spread across the Nation and the colonizers had no option but to surrender."

Uhuru continued saying that his purpose for reclaiming the gardens and renovating them is because of the significance the place has in Kenyan history.

"Why do I call Uhuru Gardens a hallowed ground?  I do so because our Founding Fathers wanted us to celebrate this ground as a camp of martyrs and the birthplace of a Nation.  A place of remembrance, healing and renewal."

He noted, "My joy today is that my administration has restored the sanctity and historical significance of Uhuru Gardens. Following many years of neglect, this historic site had become a den of thieves.  It is on record that the 68 acres on which these sacred grounds sit had fallen into the hands of some unscrupulous individuals.  My Administration had to reclaim the ‘grabbed’ site in 2019 and restore its dignity and purity.

Yesterday, I had the distinct honour of inaugurating these grounds as a monument and a museum of remembrance; and a place of unedited history.  And we have done this because a progressive nation does not hide its history.  It confronts it and endeavours to correct it, to change the future."

The Kenya Defence Forces have paid tribute after the death of a pilot who was involved in the first KDF Museum Airshow.
Exclusives
1 month ago

While still on the red carpet - in the full glare of the media cameras - Ruto started to fix Rachel's golden sash.
Politics
1 month ago

All about Trio Mio, Femi One and Iyanii's patriotic song

Femi One, Trio Mio and singer Iyanii brought the house down at the 59th celebration of Madaraka Day by performing their patriotic song.
Entertainment
1 month ago

You most likely missed these moments at the Madaraka Day Celebrations
Politics
1 month ago
WATCH: For the latest videos on entertainment stories