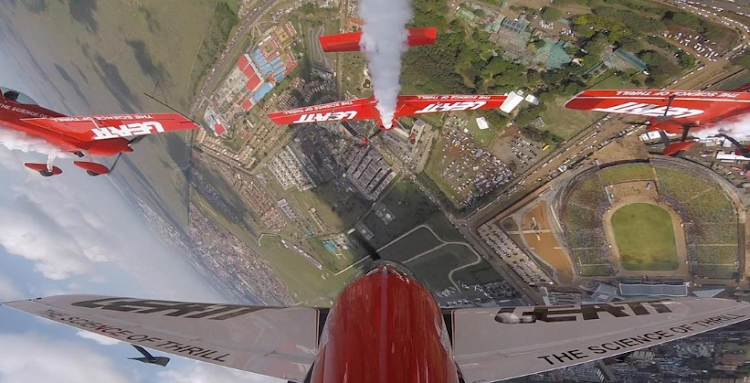 The Kenya Defence Forces have paid tribute after the death of a pilot who was involved in the first KDF Museum Airshow.

Mark Sampson died on Tuesday in a flying incident in Harare, Zimbabwe.

Media reports indicate that the pilot killed in the Charles Prince Airport sunset aerobatics air show crash was part of the pilots of the Marksmen Aerobatic Team.

Eyewitnesses told Zim Live,  'They were virtually at the end of their display when the tragic accident happened."

KDF penned a moving tribute that was paired with an aerial shot of a pilot's view during the air show.

"#marksmenaerobaticsteam @team_aerobatic Fly high in the clear skies. Blue skies and tailwinds aviator. Rest with the Angels Mark Sampson. The Nairobi show was perfect with you. #madarakaday2022."

In an earlier tweet, they wrote, "As we celebrate #madarakaday2022 let us remember the late Mark Sampson, also known as 'Sammy' One of the Pilots who made our #museumairshow an unforgettable. He Crashed his plane on 31st May 2022. He was an exceptional aviator, brilliant in everything he achieved."

A statement from the team said they were devastated and were working with the Zimbabwean authorities.

The airshow at Wilson Airport in Nairobi on May 28 was held in conjunction with the Aero Club of East Africa.

Announcing the sad news of Sampson's death, they put out a statement.

“It is with great sadness and a profound sense of loss that today, the Marksmen aerobatic team can confirm that Mark Sampson, outstanding aviator, honoured team member, trusted number-4 and loyal friend, perished in a flying incident in Harare, Zimbabwe,” read part of the statement by Nils Faatten.

While still on the red carpet - in the full glare of the media cameras - Ruto started to fix Rachel's golden sash.
Politics
6 months ago
WATCH: For the latest videos on entertainment stories