MC Jessy proves you need loyal, moneyed friends in such a race

• MC Jessy made a U-turn when he announced that he was intending to vie as an independent candidate. 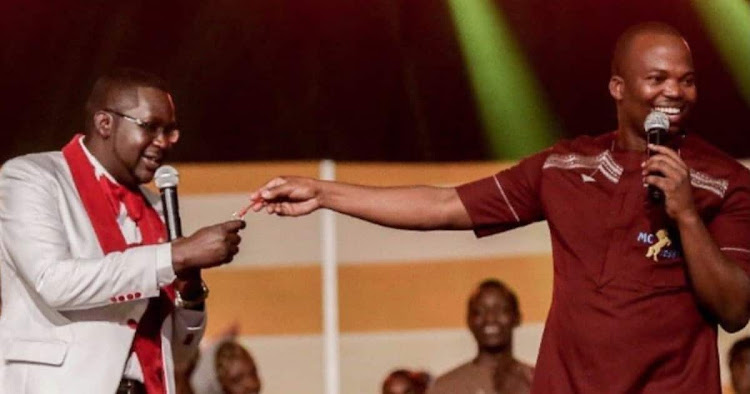 Taking to his Instagram, the funny man shared a photo of his celebrity friends who attended the invite-only event.

Touched by their presence and support Jessy wrote, "And they all came out for the dinner to support the vision for South Imenti."

The dinner party comes just days after the comedian announced to his constituents that he would be on the ballot box, despite Deputy President William Ruto's announcement that  he had dropped his Imenti bid to support a UDA candidate.

Jessy made a U-turn when he announced that he will vie as an independent candidate, while maintaining his support for William Ruto.

"Sent like an arrow from a mighty man’s hand. We keep going….. Bado Tuko kwa race. Let’s do this South Imenti, on August 9, it is. Thank you my Boss HE The Deputy President Dr William Ruto for your counsel, My support For you remains Intact!!!! #MPSouthImentiConstituency2022," Jessy said.

Weeks after his declaration, Classic 105's  Mwalimu King'ang'i called on politicians who were not able to clinch party tickets in nominations to just wait until the next elections.

He argued that politicians who are planning to run as independent candidates would just be wasting their time and money.

Speaking on Maina and King'ang'i show, the presenter said, "If you failed nominations or your votes were not sufficient, or you are not wanted....it is not a must. Don't start going independent saying the ground wants you. You want to sell your plot, car....leave it, don't force it."

Bahati, MC Jessy, Jaguar are celebrities who have complained about their political parties
Entertainment
4 weeks ago