• "...it is not easy growing up in the house of a giant who grew bigger and bigger as we went along. But that same gentle giant always took your hand," he said.

• “Come let us move to the next stage as you also guide me. A patriot who wanted the best for his Kenyan people and his family. I already feel the hole in my heart," he said. 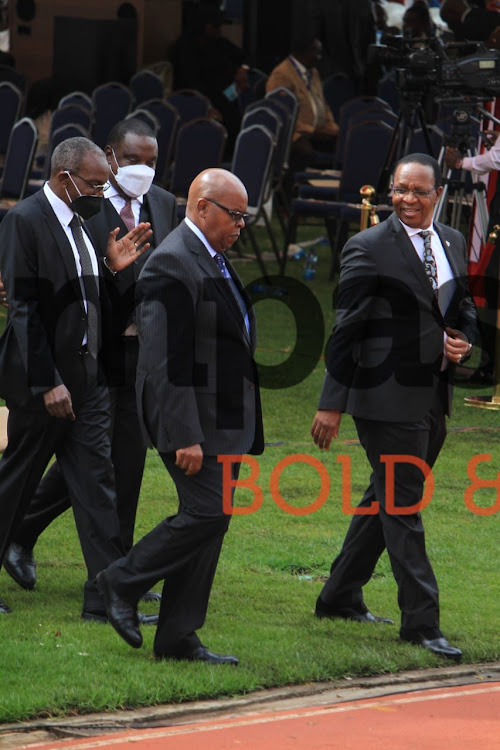 Jimmy Kibaki at his father's funeral's

The late Mwai Kibaki’s son David Kagai Kibaki has narrated how his father drove him to school despite busy schedules.

In the tribute seen by the The-Star on Friday David said Mwai Kibaki remained just a Dad to him and his three brothers.

“He did everything a dad is supposed to do. He drove to my school when he did not have important early morning appointments. He attended the Parents Teachers meetings when they were convened and listened keenly to what the teachers had to say about my progress, or lack of it,” he said.

“Much to his consternation, he seemed to be more appraised about my diligence in making numerous friends, but not in scoring A’s! He took all this in his stride, just as he did so many other things in his Life. “

He said that many people referred to his Dad as their “Mentor’’.

“Mwai Kibaki was my mentor too. He mentored me in so many aspects of life. Patience was one value I learnt from him. He taught me that nothing good comes instantly,” he said.

“ You must work hard at it," he often said. Sure enough, those who chose to listen to his wise counsel, me included, managed to navigate the challenges that life presents.”

David said his father had plenty of time for him and his siblings.

“He blocked off his diary when we were on school vacations and took time to be with us. When our birthdays rolled around, he hosted our friends in the garden of his home for our birthday parties,” he said.

“Ever the jovial personality that he was, he would invite my friends’ parents to stay on and be part of the celebration. They all knew Dad and his kind hospitality." 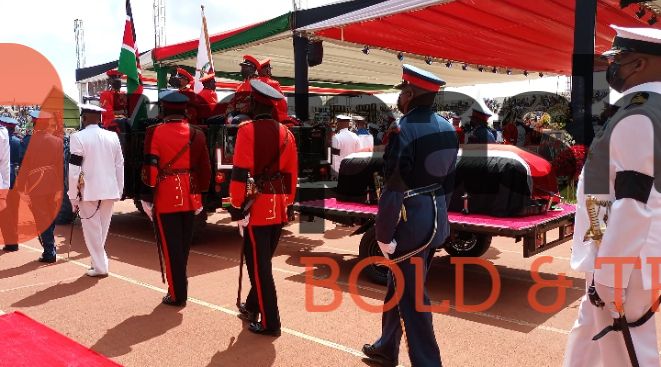 Makana is currently looking for a job after losing his due to the drama he caused outside parliament.
Politics
3 weeks ago

He recalled how he spent a considerable amount of time supporting his father in the development of his assets, something which he enjoyed doing even today.

“This has been a lesson on “give and take.” One of those “investments” was his political career. I can honestly say that Dad’s Political Victories were hard-won battles. I was in the thick of his 4 Presidential Campaigns. They were not easy, but my siblings and I came to know many people and we made many friends. These were true lessons on Resilience,” he said.

“Dad’s Public Life was his. He did not drag me into his public rallies and harambees. It was voluntary. Dad was a Democrat even in his own home! He knew I had other interests.”

David said his father encouraged him to pursue what he was interested in.

“He did not want to make me into a replica of himself. No. Dad wanted me to grow into a well-educated focused individual, with a strong character and a unique defined personality,” he said.

“This is what he dreamt and hoped for every Kenyan. So, he worked at it all his life, because he sincerely believed that a nation of 'well developed' individuals, would surely prosper to great heights. This was Dad’s Vision.”

He said his father was a great man and had fine human qualities.

“He was kind and very generous. He dedicated his life to the service of Kenya. He served Kenyans with humbleness and humility,” he said.

“I can say there are many lessons that can be learnt from my Dad’s Life. One of the more important ones is that victory can be gained Peacefully. Dad was peaceful at home and in his work."

David said his father was a Statesman who pushed the envelope beyond belief.

"He was a man who featured in the molding of our Kenyan Nation from its very beginning. He and his dear friend, Tom Mboya wrote the country's economic blueprint for the next generation. Mwai Kibaki served in all the most significant posts a person can hold in our beautiful Kenya," he said.

"But for me, he was my humble, loving, and caring father. He was a pillar we looked up to. Always fair and moderate."

"What a life we had...what a man. He and my mom Lucy, what a pair, one the disciplinarian one the philosopher...you know which..."

David said his father was a man of integrity, wit, humility, and wisdom.

"...it is not easy growing up in the house of a giant who grew bigger and bigger as we went along. But that same gentle giant always took your hand and said, “ come let us move to the next stage as you also guide me “ A patriot who wanted the best for his Kenyan people and his family. I already feel the hole in my heart," he said.

"Go well my hero, my friend, my loving Dad."