Mum of 12 describes being pregnant 16 years in a row

Iris Purnell has been pregnant for 16 consecutive years 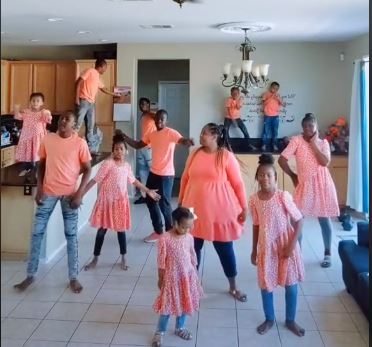 Prgnancy is not for the faint-hearted. Trust me I know that much. Iris Purnell is a mother of twelve children who loves showing off her beautiful family on Tiktok.

Iris has spent 16 years in a row being pregnant. Yep! You read that right! The woman in an amusing clip for her 350k followers revealed she was pregnant every year between 2004 and 2019. She defended her experience saying she loves carrying babies.

This time around, she is done having children. Iris has had her tubes tied. After the medical procedure to tie her tubes, Iris adds that she is adjusting to not carrying a pregnancy anymore. That it's hard accepting this fact.

“Not all my pregnancies were easy,” Iris explained. “I had six C-sections… but being pregnant gave me a spiritual elevation. I learned to be patient and to sit still with my body.”

The mother of twelve is a choreographer by profession which explains why most of her family videos on her Tiktok channel are her children and husband dancing.

The blessed mother recently went viral after sharing a video revealing she had been pregnant each year for 16 consecutive years.

Tiktok users were amazed at her strength to do this that for that long. Check out some of their reactions below;

Sassy6redLooks good but don’t have the older kids raise the younger ones.

Myeisha WilliamsYou look GREAT!!! I think a large family is AWESOME…so much love!!!🥰

The 12 children have also have very interesting names as well.  The dancing family revealed their names in a recent clip where they took turns to perform the moonwalk.

The only sibling to have a more popular name is six-year-old Michael. Last but not least is Royal, 5 Heavenly, 3 and two-year-old Hope.

Diana Marua wants a baby girl as boys require too much energy to raise.
Entertainment
2 weeks ago

The child maintenance lawsuit against former Nairobi Governor Mike Sonko has been dropped. The woman explained that she had dropped
Politics
2 weeks ago

Prof Hamo has unveiled the full face of his child. In a video on Instagram, Hamo told that they have sleepless nights, choosing when and how to sleep.
Entertainment
2 weeks ago
WATCH: For the latest videos on entertainment stories