Nabii has his own own Bible which has 69 books

• Yohana claims he has healed people suffering from HIV/AIDS, cancer, leprosy and wounds.

• His youngest wife is 24 years old, with a six-month pregnancy. Nabii said he is still young and he will still marry more wives in future. 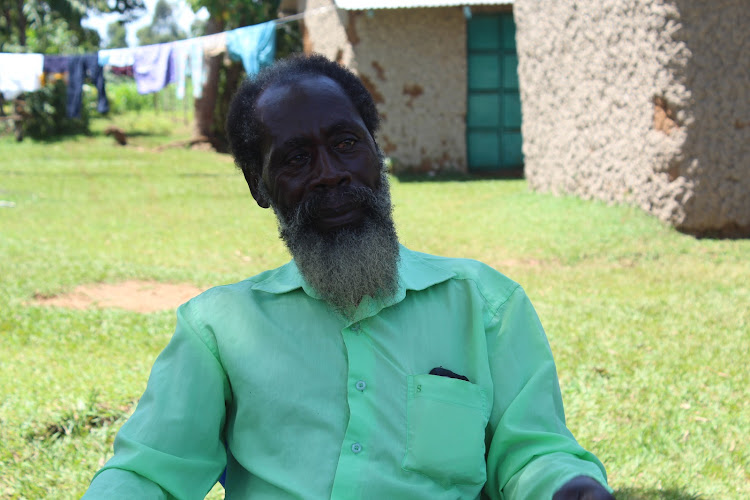 Yohana Tano Nabii, 82, from Nandolia village in Bungoma county, who is a self-proclaimed prophet claims he has healed people suffering from HIV/AIDS, cancer, leprosy and wounds.

Nabii, a man with 42 wives,  spoke with Star in an exclusive interview explaining how he has healed many of his clients using herbal medicine.

The father of 289 children said he helps unite men and women who have divorced.

Nabii further said he has his own Bible, which has 69 books in it that he uses to teach his followers at Muungano Church.

“All my services are linked to the Bible. I am the only God’s man who will change the gospel of this world," he said.

In the interview at his Nzoia residence, Nabii said he was born in 1940 in what is today Saboti constituency in Trans- Nzoia county.

His father later relocated to Kanduyi in Bungoma county when he was eight years old and before he (Nabii) abandoned his family to serve the Lord.

“Serving the Lord is something that I started a long time ago and I have never given up,” he said, adding that he has been in service for 62 years.

Nabii further said God gave him the ability to prophesy, pray for the sick and treat patients with herbal medicines.

He said he has prayed for millions of people from all over the world.

Nabii also said he attends to the clients free of charge without asking for cash, arguing that it was a gift given to him by God and he won't let clients pay him.

Nabii has five residences: three in Bungoma (Nandolia, Matulo and Webuye), Kitale and Lugari in Kakamega.

He said his youngest wife is 24 years old, with a six-month pregnancy. Nabii said he is still young and he will still marry more wives in future.

“I have a big farm and enough resources to finance my family,” he said.

Nabii has his own church in his compound with wards to admit patients in bad condition.

“These herbs sometimes have side effects to the body therefore in my compound I have set aside some rooms where patients can rest and undergo prayers,” he said.

After praying for the sick, he moves to Chwele River and baptises them in water, saying it is a way of washing their sins.

Nabii's 10th wife, Catherine Nalonja, who is a mother of five, said she was was married in 2002. She all the 42 wives stay and relate well with the prophet.

She added that Nabii has no problem with providing for the family.

Ruth Matete composed many songs while mourning her husband.
Entertainment
3 weeks ago