Magoha has died at a time he was preparing the burial of his brother who passed way in the US.

• He was resuscitated back by his son who is a medical doctor and then near Nairobi Hospital, he collapsed again.

• Magoha had a premonition that his time has come and told his wife (I suppose) but that you will get it from her. 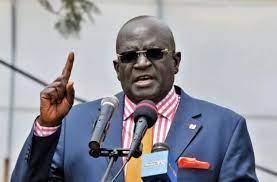 Former CS George Magoha who has passed on.
Image: COURTESY

Kenyans are still in shock following the untimely demise of former Education CS George Magoha who passed away on Tuesday at the Nairobi Hospital.

Speaking at Lee Funeral Home, Magoha’s close friend Professor Walter Mwanda narrated his last moments and all the people he spoke to.

“He said he wanted to see me urgently and I was at a clinic at the Kenya National Hospital seeing a patient and I call a colleague to take over.

"I rushed to my car and as I was driving, his wife called again and asked me whether I had a blood pressure machine.

"I rushed back to my clinic, and got a blood pressure machine. As I was about 4 kilometres from the home, she texted and asked if I could get an ambulance.

"I was too close to their home and there was traffic next to the home, at the gate. I met some assistant who rushed me in. I met the son at the door, who rushed me to where he was.

"He was seated actually and said ooh you have come. I said we take the blood pressure but it was not recording.

"At that time he slipped off from his sitting position and we carried him to the car, we went into the car, and the wife and my driver followed. They were ahead of us by about 200 metres.

"They reached about 10 minutes earlier than us and from the information, he had what we call a collapse.

"He was resuscitated back by his son who is a medical doctor and then near Nairobi Hospital, he collapsed again.

"He was rushed to causality, there was resuscitation which took a bit of time but they were unable to revive him.

"What I know is that he was waiting for me, because he had told me some things about his life and his final days,". 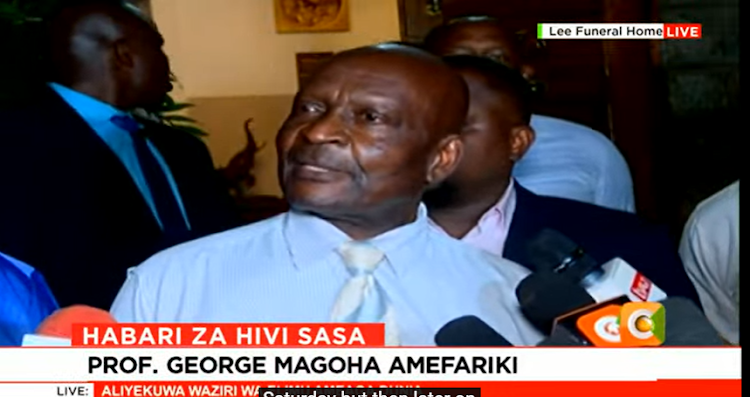 “In all aspects, he was second to none, whatever duty and responsibility he undertook he did his work diligently.

"He dedicated himself. He gave himself whatever responsibility he was given…he never took a second position in anything,"

In his narration, Professor Mwanda mentioned that Magoha collapsed four times before he was pronounced dead upon arrival at the Nairobi Hospital.

"He then asked the wife to call the son, then the daughter-in-law. At that time he also said he wanted to see me. And the wife did the same – called the son, and daughter-in-law and called me in that series. He was at home,"

Sadly, Professor Magoha was preparing for the burial of his brother who passed away while in the US.

“He was making arrangements for his brother whose body must have arrived today from the US.

"Over the last 6 weeks, we have been communicating but he has been extremely busy.

Magoha was rushed to the hospital after he collapsed at home today.
Politics
3 days ago