According to The Star the Education CS passed on at a Nairobi hospital on Tuesday.

• The brother's burial was set for this coming Saturday. 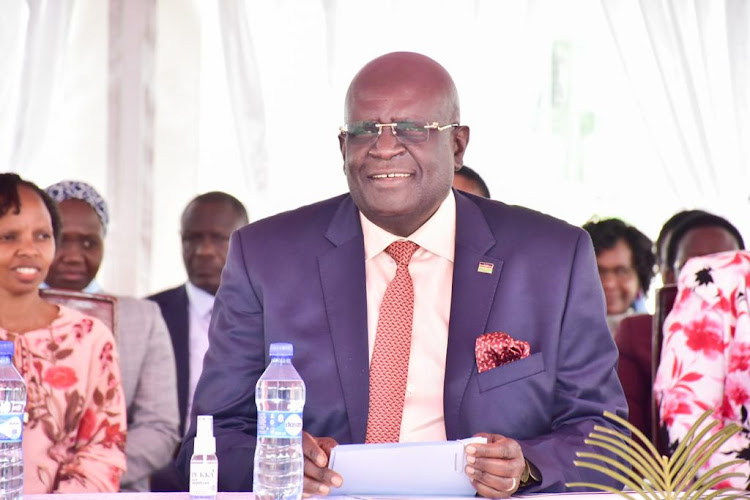 According to The Star the Education CS passed on at a Nairobi hospital on Tuesday.

His death comes a few days after he lost his brother. The brother was too a professor.

The brother's burial was set for this coming Saturday.

Prof. Magoha who is an alumnus of DR Livingstone Primary School and Starehe Boys Centre and School graduated from Strathmore College and the University of Lagos, Nigeria with a bachelor's Degree in Medicine.

His journey to greatness began as an intern and rose to senior resident and clinical lecturer in surgery at the Lagos University Teaching Hospital before joining the University of Nairobi in 1988, where he became a full professor in 2000.

Magoha's 91-page CV paints a picture of a man with firm roots in the education sector, with zeal and gusto for handling tasks and responsibilities in a strict and professional manner.

At The University of Nairobi where he served as the Vice-Chancellor, he was nicknamed a "Buffalo" because of his boldness in taking head-on anyone who rubbed him the wrong way.

He prides himself on many achievements including being the first vice-chancellor to be appointed competitively, and whose leadership oversaw the completion of the construction of 22-storey university towers to 80 per cent.

During his tenure, student riots that had become a norm at Kenya's first university were quelled down.

His boldness, strict and no-nonsense character saw him appointed as the KNEC chair with direct responsibility of cleaning the mess and restoring sanity at the body accused of failing to tame exam irregularities.

With the dissolution of the KNEC board, It was a start from the scratch for Magoha, in his journey towards redeeming the lost integrity of the council. Fighting examination cartels that were minting millions of shillings from candidates and school heads for exam leakages was his uphill task and cleaning the mess at KNEC was second.

The usual game of musical chairs of trying to fill the gap left was also among the daunting to-do list of the specialised neurosurgeon.

But if numbers don't lie, statistics on the number of exam irregularities reported during his era compared to before indicated significant progress towards eradicating exam cheating and cartels.