He was pronounced dead after efforts to resuscitate him failed.

• Ruto said that it was a privilege to have worked with Prof. Magoha in various sectors. 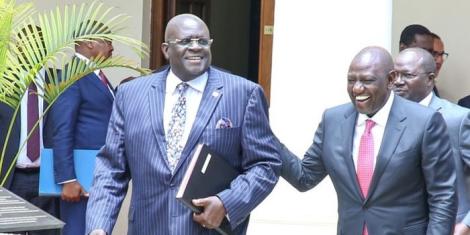 In a statement issued on Tuesday, President Ruto eulogised Prof. Magoha as 'a towering giant of our time and a great man'.

"Magoha is a towering giant of our time, a great man who stood tall in the academy, where he excelled in learning, teaching and research, as well as in administration," Ruto said.

"Magoha also famously served as the Cabinet Secretary for Education. Throughout his tenure, he evinced a commitment to high standards in the public service and an uncompromising integrity," he said.

Ruto said that it was a privilege to have worked with Prof. Magoha in various sectors.

He said he worked with him from the university where he completed his post-graduate studies, to government, where he served with distinction as the chair of KNEC and later as my colleague in Cabinet.

"We have lost a gifted, unique, distinguished and great servant of Kenya," he said.

"I join Kenyans and people from other parts of the world in mourning the passing of Prof. Magoha. I also send condolences to his family and pray that Almighty God grants them divine comfort and grace in this moment of grief."

Magoha was rushed to the hospital after he collapsed at home today.

He was pronounced dead after efforts to resuscitate him failed.

According to The Star the Education CS passed on at a Nairobi hospital on Tuesday.
News
2 days ago