Ian Nene has done his first jib as a wedding officiant 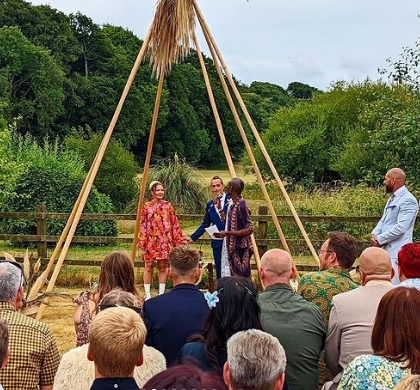 Ian Nene aka Almasi has delightfully shared an experience where he officiated a wedding. The former child actor lives abroad and is often seen in the company of meditation and yoga enthusiasts worldwide.

The lifestyle he has adopted has seen him be criticized by Kenyans critical of his change.  Nene is living his life unapologetically and says his unorothodox lifestyle is none of our business. His spirituality has also been questioned and on one Instagram post, Nene said

"One of my mentors shared this powerful statement… When an overwhelming amount of negative vibes come your way…Go and Kiss the SunBreathe the AirChant, “I Am Not The Controller” Experience Freedom."

After spending time as a celebrity actor in Kenya, Ian wanted to come away from the fast lane and reconnect with his true authentic self.

Ian has spent multiple years as a monk diving deeper into meditation, self-awareness, and spirituality.

Most Hindus are vegetarians and they consider the cow to be a sacred symbol of life that should be protected and revered.

They worship the animal, and Alamsi has been posting photos posing next to cows, 'praising' them. "Sweet connecting with Cows and Mother Earth."

Ian Nene, who currently resides in London, United Kingdom disclosed that he practices Vaishnavism one of the major branches of Hinduism along with Shaivism, Shaktism, and Smartism.

Machachari actor Almasi was playing with a snake on his neck.
Entertainment
3 months ago

I was a wild child - actor Almasi confesses

As time went on, I realised I did not know what the hell I was doing with my life. I had made such rash decisions. - Almasi
Lifestyle
8 months ago

SITISHIKI!! Former Machachari Actor ALMASI Finally Speaks Out On His Unorthodox Lifestyle
Lifestyle
5 years ago
WATCH: For the latest videos on entertainment stories

Why Baha wanted a family at a young age