Mulamwah hangs out with his daughter Keila

•Mulamwah and Sonnie parted 3 months after the birth of Keilah.

•The ex-couple has moved on and are looking forward to dating new people. 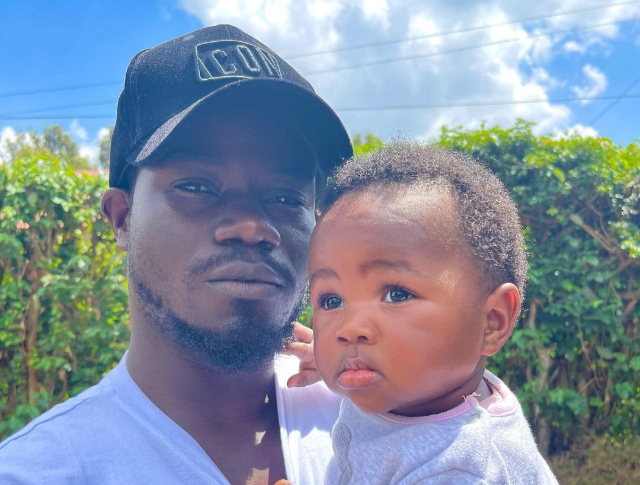 Kendrick Mulamwah is taking co-parenting seriously after his nasty breakup with his baby mama Sonnie.

The comedian took to his socials to share a photo of himself hanging out with his daughter Keilah.

Sonie and Mulamwah broke up when their daughter was three months old.

He alleged that his baby mama had cheated on him.

He also alleged that he was not responsible for fathering Keilah.

Sonie has recently revealed that it has not been easy raising her daughter as a single mum.

' I wouldn't lie that it is easy, it has been tough. It has not been easy because I have to play both the role of a mother and a father. Even when life is tough I must go out there and look for means to provide for my baby," she said.

Sonnie revealed that she had not shut the door yet on love saying she loves the feeling of being loved.

"I have not given up on love because it feels good to be loved."

The couple announced their breakup via a post on their social media platforms.

"We both decided to separate a very long time ago but we saw it fit to also put everything straight that we are no longer together as partners.

Of course, our beautiful daughter's priorities come first, and she will never lack anything within my reach. For Carrol thanks for everything I still have the utmost respect for you, and all the best ahead." said Mulamwah

It is not clear whether they have decided to patch up things or not, all in all, we are happy he is spending time with his girls.

'I am a proud multi millionaire!' - Mulamwah

Pritty Vishy's mentor is Diana B
Exclusives
9 months ago

Kenyan celebs and those pesky unplanned pregnancies
Lifestyle
9 months ago
WATCH: For the latest videos on entertainment stories