'My life is in danger' - Late Mzee Kibor's youngest wife

• Yunita has appealed to the government to step in, and help her get justice.

• Before his death, Mzee Kibor was embroiled in a push and pull with his sons over a land tussle that even led to an incident that saw the veteran farmer almost pull a trigger on one of them. 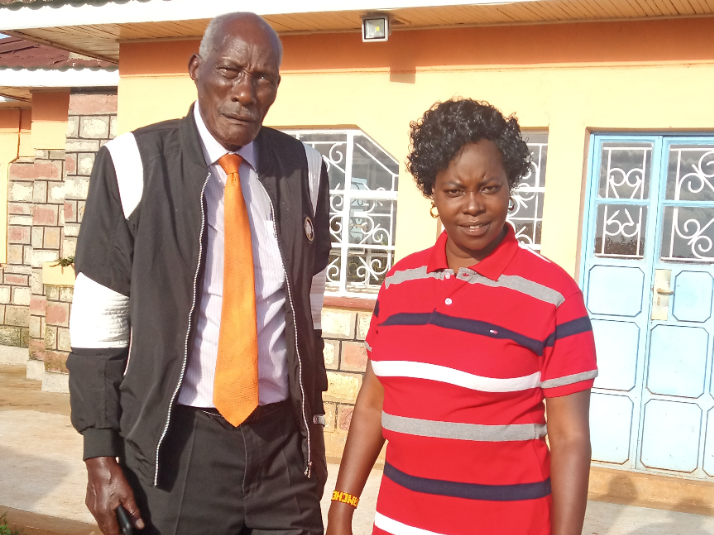 Late Mzee Jackson Kibor with his fourth wife Yunita at their home near Eldoret on September 9.
Image: FILE

Barely a month after prominent Uasin Gishu farmer Mzee Jackson Kibor was buried, a storm is simmering in his family over the massive wealth he left behind.

The property row took a turn for the worse on Wednesday after the late's youngest widow Ms Yunita Kibor claimed there is a plot to disinherit her the property left behind by her husband.

The youngest widow said the plot to deny her share of the inheritance started even before her husband was laid to rest.

"I was surprised to be served with property restrictions filed by some of Mzee Kibor's children which were interestingly issued on April 1, the same day we were burying him," she said at her Chepkoilel home.

She added: "Since then I have had no peace because I have been ejected from my Kabenes matrimonial home, and on Tuesday, my 57 livestock was shared among my co-wives' children."

Yunita has appealed to the government to step in, and help her get justice, saying she has been physically assaulted.

She said the matter has been reported to the police.

"My children are still young, and I need to take care of them. They deserve their rightful share of property left behind by their father. But if they lose their inheritance their future will be bleak," she said.

Before his death, Mzee Kibor was embroiled in a push and pull with his sons over a land tussle that even led to an incident that saw the veteran farmer almost pull a trigger on one of them.

The sons are said to have gone to court demanding a share of their father's wealth who was not willing to give them any at the time.

Kibor, in an interview, told the press that the sons had squandered portions he had allocated them before and asked them to go and seek their own wealth.

Before his death, Kibor is said to have sub-divided his wealth to his children and even held a meeting with them to quell any animosity.

Kibor gave his life to Christ in 2018.
Entertainment
2 months ago

Kibor was accused of attempting to shoot his son over land issues.
Entertainment
2 months ago