Wajackoyah reveals his admiration for the Late Catherine Kasavuli

Kasavuli will be laid to rest tomorrow

• George Wajackoyah has hinted having a crush on Catherine Kasavuli.

• He recounted of the times he used to visit Ngara just to see Catherine. 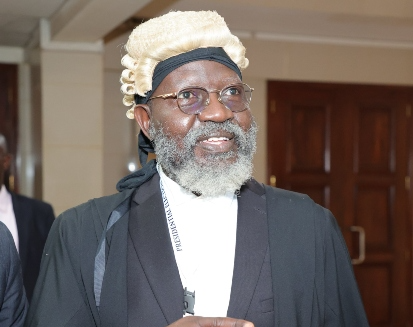 Roots party leader George Wajackoyah has hinted at having a crush on the late Catherine Kasavuli during their high school days.

Speaking at Friends International Centre, Ngong road, Wajackoyah talked about being in school at the same time as the departed journalist.

He recounted the times he used to visit Ngara just to see Catherine.

"And I don't think whether this any other person who knows, Catherine more than I do because in 1976, both of us were Form Ones.

She was in Ngara maybe I thought it was St Theresa's Eastleigh, she was in Ngara while I was in city high school and we are neighbors. By that time, I just graduated into a full grown-up chokora from a rich Hare Krishna Temple," Wajackoyah said.

Wajackoyah added that he would visit Leonard Mambo Mbotela so he could get a glance at Kasavuli in Ngara.

He stated that he was attracted to Kasavuli and even applied 'ambi' to have glowing skin like that of Catherine.

"I used to see her and I used to go to Leonard Mambo Mbotela's home in Ngara just next to City High School trying to find out how I would meet my sister and her brilliant bright color, made some of us go and look like her.

I think most of you who were in my generation might have come up in a generation of Ambi. Wakati tilikua tunajipaka ambi. I put on my first ambi just because I wanted to attract my sister.

We'll got to look at it and I put on my first ambi because I wanted to attract my sister. I hope she's here."

Wajackoyah also revived talks about the medicinal use of marijuana, saying Kasavuli died of a curable disease.

Catherine Kasavuli will be laid to rest at Zululu village in Vihiga county on Saturday.

And what about other people like the former candidate for the presidency, prominent lawyer George Wajackoyah to find him without the scarf on his ...
Politics
1 month ago

Gachagua, Karua among most searched people in 2022

Rigathi Gachagua, the deputy president and Narc Kenya leader Martha Karua have topped the list of most searched personalities in 2022.
News
1 month ago

His wife is caller Meller Luchiri . Wajackoyah and Meller, an African-American, were married in early 90s.
Entertainment
2 months ago