She's heard introducing members of the office at a function in an undated video.

• Charlene has been a topic of discussion since her father came to power on September 13 over her role in government.

• On November 26-27, Charlene trended at number one on Twitter as people questioned in what capacity she was engaging in political affairs. 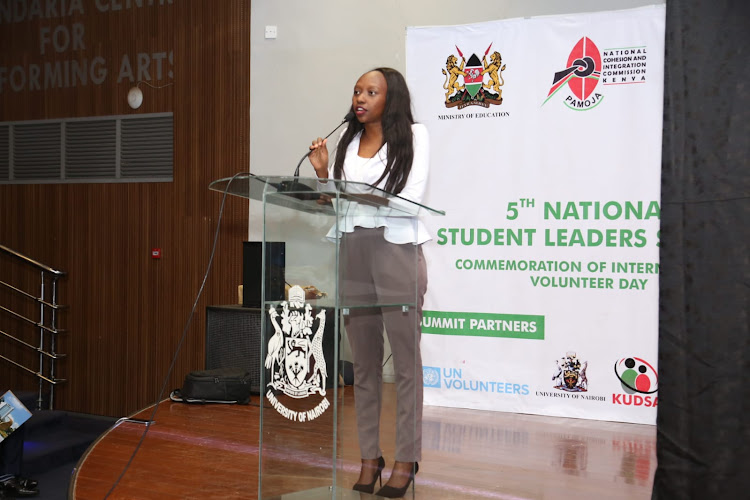 President William Ruto's second-born daughter Charlene Ruo was on Tuesday trending again on Twitter over the unofficial assignments she's been performing in the recent past.

Charlene, who has been a topic of discussion since her father came to power on September 13, seemingly believes her role as a daughter of the First Family is entrenched in law.

In an undated video clip that has emerged online, Charlene is heard referring to her office as the Office of the First Daughter while introducing members of her team at a function.

"Before again I continue I wanted to introduce quickly my team from Kenya," she said.

She went ahead and introduced a Mr Mike Sagana, whom she said is a politician and her principal advisor.

"And this is Jermain Momanyi, he is the head of Trade and Investment at the Office of the First Daughter," Charlene said to which the crowd responded with cheers, giggles and claps.

"I don't get what is funny," Charlene said in response as she continued with the introduction in the 40-second clip.

On November 26-27, Charlene trended at number one on Twitter as people questioned in what capacity she engaging in political affairs.

This followed her series of political engagements including visits to county assemblies, meetings with governors and an unofficial state visit to Morocco.

On November 29, Charlene appeared to respond to his critics when she went shopping at Quickmart supermarket in an apparent mockery of her critics who nicknamed her Quickmart Ivanka.

Those behind the tag drew parallels between her and former US President Donald Trump’s daughter Ivanka Trump who traversed the country during her father’s reign, working, but without a defined official role.

She also thanked those who defended her when the accusations of her "lying" came up.
Politics
1 month ago

It's true, I sold smokies at varsity - Charlene Ruto clears the air

President William Ruto's daughter Charlene Ruto has defended her story of selling 'smokie kachumbari' while at the university to sustain herself.
Entertainment
1 month ago