• The fake 'Wajackoyah' has been successfully fooling Kenyans.

• He is also campaigning for the ticket to become Kenay's 5th President. 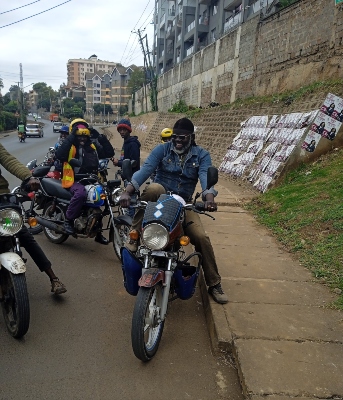 The aspiring politician met the lookalike this past weekend, and rewarded him handsomely for resembling him.

The real Roots Party Presidential candidate had invited 'Wajackoya' to his luxurious home to meet and get to know each other better.

The fake Wajackoya walked into the home office of the Roots candidate telling of his anxiety "niko tuu fine" and was handed a stash of money plus a watch and other items.

Mheshimiwa Wajackoya praised him and said "come here men" giving him a hug and fist bump.

The 5th allowed the fake to sit on his desk singing some documents as he proceeds to the safe to remove bundles of cash.

A post shared by THE AFRICAN PRINCE OF COMEDY🇰🇪 (@2mbili)

Professor added, "Do we want to do this as a whole ceremony. I have never done this. This watch is one of the most expensive Gold watches in the world I'm a watch collector."

Removing another watch to gift the 'fake' Wajackoyah tells him it's also pricey but doesn't mention the cost. "I bestow this gift to you only my grandson who is in Spain I gave him a Sh 7 million watch," he said.

The meeting was arranged after the fake Wajackoyha had an 'altercation' with a YouTuber last week Friday, July 22 at the Radio Africa offices.

The fake Wajackoyah was scheduled for an interview on Kiss Tv and proceeded to the lifts to exit the building.

But he was prevented from accessing the lift because YouTuber 2mbili was not willing to be in the same space as the 'politician'.

Here are things to know about the fake Wajackoyah:

1. His name is Gordon Owino.

2. He loves jewelry as much as the politician.

3. Owino is a boda boda operator.

4. He is more comfortable speaking Kiswahili than English.

5. He says he is not rich like the real Wajackoyah

6. Owino is just as passionate about politics and preaches it to whoever will listen on the ground.

Pastor Ng'ang'a to Wajackoyah- "I curse you, may you die before your time comes. Devil."
Entertainment
3 weeks ago

Wajackoyah will also ensure that police don't arrest people for bhang possession
Politics
1 month ago
WATCH: For the latest videos on entertainment stories

Watch: Wajackoyah pushed around by 2mbili