• Wajackoyah is not playing around when it comes to promising goodies to his base.

• Wajackoyah wants to give reparations to people who have been jailed for bhang possession. 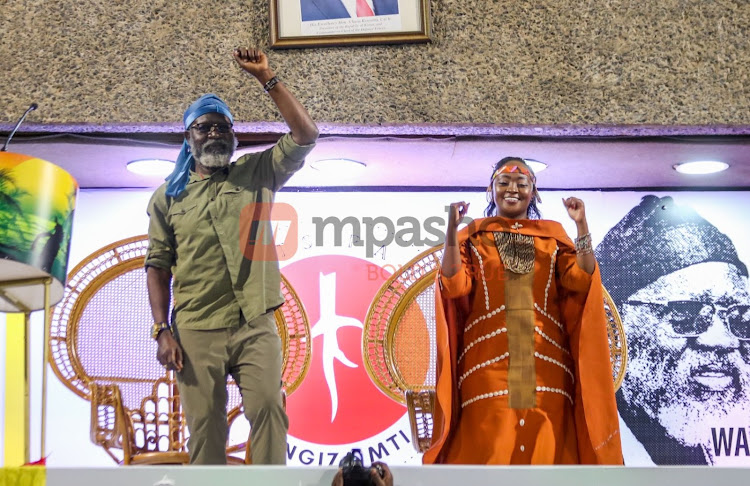 Roots party presidential candidate George Wajackoya's moments on stage as he revealed his 10 key agenda in his Government during the launch of the manifesto at KICC.
Image: WILFRED NYANGARESI

George Wajackoyah, the Roots Party presidential candidate has promised that he will be releasing all inmates arrested over bhang possession were he to become the president.

Wait...But there's more! The controversial and charismatic politician has added that he will also be offering some financial boon for those same people.

And that's not all, Mr. Wajackoyah said that those same people will be asked for their forgiveness for the punitive punishment they had already suffered.

“When I’m sworn in, all those who have been arrested and jailed over bhang possession will be released. I will release all of them and go with them to the state house and everyone who would be freed on that day will be given Ksh1 million and asked for forgiveness for being arrested under punitive foreign laws imposed in our Parliament," he declared.

But while Wajackoyah might be known as the weed smokers' biggest supporter, he still hasn't forgotten the people who enforce our laws.

He pledged to cultivate a great relationship between police and those found in possession of bhang.

“For a long time, police have been paid small salaries the last time their salary was increased was during Kibaki's error. We must have a good relationship with our officers because no police will arrest anyone with bhang in my government,” Wajackoyah said.

Wajackoyahs promise to pay those people who had been jailed for being in possession of bhang will not shock anyone who has seen his manifesto.

The only question is can a president legalize bhang just by an executive statement. Wouldn't Wajackoyah have to legalize it in parliament-the body responsible for making and amending our laws?

Let's not forget that under the penal code, bhang is still illegal under the law.

Wajackoyah, the flag bearer of the Roots Party,  unveiled a 10-point manifesto to Kenyans. Here are some of his ideas that captured nationwide ...
Politics
5 months ago

A python tried to swallow me as a child - Wajackoyah

I survived a python attack as a young boy - Wajackoyah
Politics
5 months ago
WATCH: For the latest videos on entertainment stories