Youth should use Ruto's wheelbarrows to transport weed-Wajackoyah

Wajackoyah questioned the promises by politicians to create jobs

• George Wajackoyah was interviewed by Mbusi and Lion on their Radio Jambo show.

• The presidential aspirant was unhappy with the fact that politicians are using youth in a bad way. 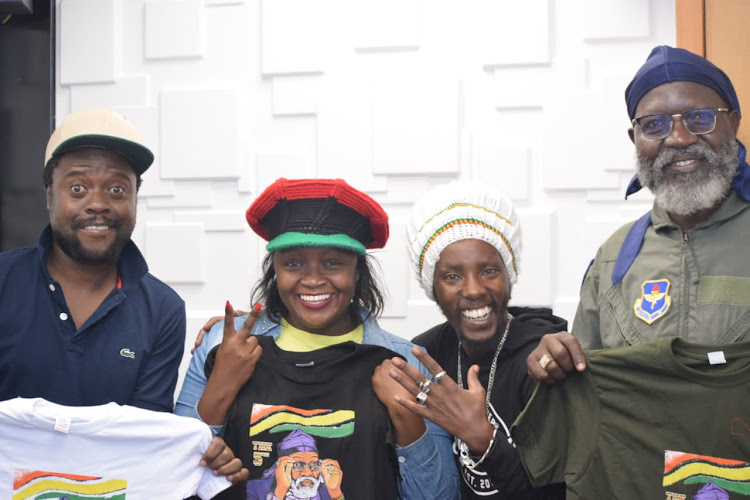 Wajackoyah with his running mate at the Radio Jambo offices
Image: Radio Jambo

Roots Party leader Prof George Wajackoyah was a guest on Radio Jambo yesterday. The interesting and captivating leader lashed out at his rivals, telling Mbusi and Lion that the leaders are promoting bad behavior in young people.

Wajoyaoyah accused the leaders of using many unemployed young graduates to cause chaos. "They are only given a small amount of money to go and throw stones at people. And if you see today's politics, those we oppose us, their job is to insult us," Wajackoyah added.

Wajackoyah bemoaned the fact that young people who aspire to venture into politics will end up following in the footsteps and examples set by their predecessors.

He added that his unemployment solution is more real than that offered by other presidential candidates.

He said that people should volunteer to pick up Deputy President William Ruto's wheelbarrows and use them to transport cannabis seedlings on August 9th.

"They have been telling people they will create jobs for the past 50 years in every political season. Where will they find those jobs?" he asked.

The presidential candidate who has become a favourite among many young people has been an enigma to for the unusual and uncharacteristic way he has run his campaign so far.

In an interview with Citizen TV, this week, the learned politician explained why he wore a durag (A durag is a close-fitting cloth tied around the top of the head to protect the hair. Similarly, a wave cap is a close-fitting cap for the same purpose) on his head.

"This durag is a protest against corruption. When African Americans were taken in as slaves. A lot of them died on the ship. They were told to throw the dead people into the water.

Before doing so, they would tear the clothes of the dead and tie them as a durag on the head. The number of durags showed the number of people who had died."

He added that he wasn't ready to stop wearing it as he is more comfortable in his current outfits.

"This is my dress mode. I have suits but I am more comfortable in casual clothing."

Wajackoya: I will smoke weed to exorcise State House demons

Wajackoya is one of the four who IEBC gave a nod to vie for the top seat in the August 9, polls.
Politics
5 months ago
WATCH: For the latest videos on entertainment stories