Wajackoyah has made many interesting promises were he to become president

• Among things Kenyans would miss from Wajackoyah's presidency include legalizing and selling bhang.

• The 61-year-old has until Thursday to submit signatures from the remaining seven counties. 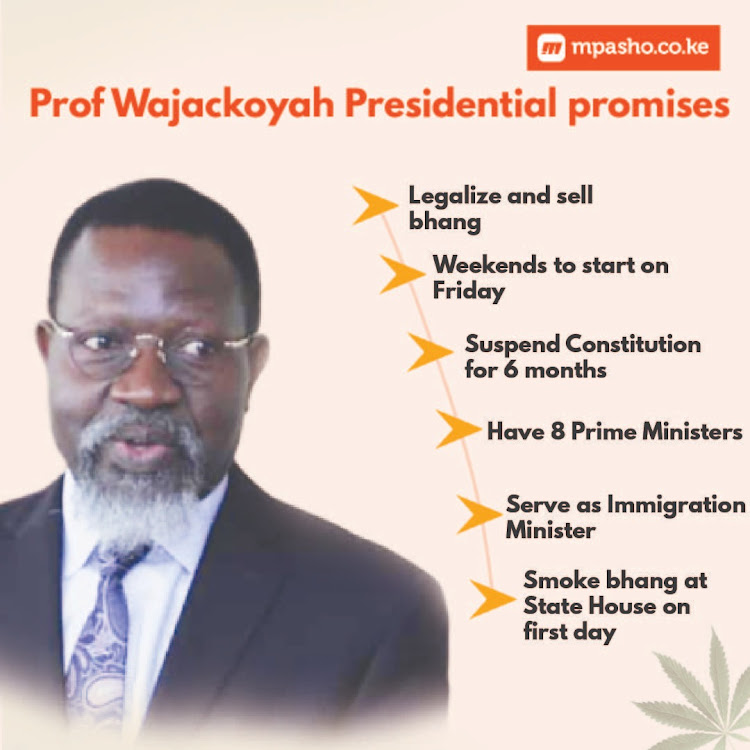 On Monday, the Roots Party presidential aspirant was turned away by Independent Electoral and Boundaries Commission, for failing to submit the required number of supporters' signatures.

The now popular lawyer only had a full list of supporters from 17 counties out of the required 24.

Wajackoyah was among the aspirants who were set to meet the national Returning Officer, Wafula Chebukati at the Bomas of Kenya.

However, all is not lost as he has until Thursday to submit signatures from the remaining seven counties.

The news was not well received by his fans and followers all over the country who were desperately looking forward to his campaigns as well as a potential Wajackoyah presidency.

But should Wajackoyah fail to submit the remaining signatures by Thursday what will Kenyans potentially miss?

Wajackoyah made headlines when he came out and promised to be the first president who would make sure he legalizes and commercializes bhang.

No other presidential candidate has ever touched on the highly sensitive subject and must be one of the reasons many potential voters started paying attention to him.

2. Smoke bhang at State House on the first day

Imagine by him being locked out means he cannot run and hence we won't have a sitting president smoking bhang at State House!

3. Weekends to start on Friday

As is the case all over the world, weekends start on Saturday and end on Sunday but Wajackoyah promised to make things more fun and ensure we start our sherehes on Thursdays because weekends would start from Friday.

4. Suspend the constitution for 6 months

The 61-year-old Don said he would ensure that he suspends the constitution as part of the first things he was planning to implement. The current constitution was promulgated in 2010.

Wajackoyah promised to appoint not one but 8 prime ministers to his cabinet. Not sure how he was planning to implement this but it would have made sense after suspending the current constitution.

Imagine we might miss out on the chance of having the first Kenyan president who will also serve as a cabinet minister.

We have until Thursday to find out whether Wajackoyah will be on the ballot.

Wajackoyah was seen in a full-combat Rastafarian style.
Politics
3 months ago