Taking a photo with Hon Raila Odinga ruined my life

• Sasha Mbote says the threats and intimidations made her become suicidal.

• Sasha says the photo was taken by Jimmy Wanjigi as she had wanted to prove to her parents she had bumped into Raila Odinga. 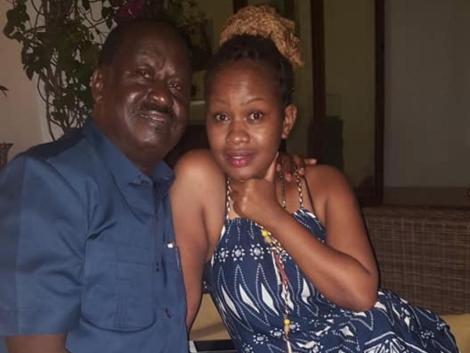 Raila Odinga and Sasha Mbote in a past photo
Image: Facebook

Sasah mbote, a masseuse whose photo with Raila Odinga went viral in 2019 says the photo made her life a living hell after it was shared on social media.

In an interview with Lynn Ngugi, Mbote says the day started like any normal day, what she did not know is that her life was about to change for the worst.

"It was a normal day for me, in the evening I went to a certain hotel to have a few beers, I wanted to have dinner but I looked at the time and saw it was late. So I called in the waiter and asked him to keep an eye on my table as I went to the washrooms."

Mbote says as she walked to the washroom she saw a table with 5 men and one of those men was Raila Odinga.

Like any star-struck Raila fan, Mbote asked for a photo,

'There was a table with 5 men and one of the men was Raila Odinga, I was star struck. 'I was like ohh my God, Baba.' He just stood like someone who knows me he said high and I proceeded to the loo. When I came back I asked him if I could take a photo of him because my parents would not believe I had seen him. Jimmy Wanjigi who was also seated at the table asked me to go bring my phone, I did."

Mbote says after Wanjigi took the photos she shared them online not knowing the kind of reaction they would elicit.

He took a few photos of us, among those photos you can notice a waiter passing behind us.

"When I opened my phones the messages wouldn't stop coming. People were calling me a M...Fcker, They said I had been paid to assassinate baba's character."

"If my parents doubted my dignity I would have committed suicide."

Raila using your song is a favour-Ohangla musician says

Martha Karua’s appointment as DP gives hope to our mothers, sisters, daughters and all Kenyan women
Politics
1 month ago
WATCH: For the latest videos on entertainment stories