Ida laid out her thoughts on Martha

• Martha Karua will be working closely with Raila Odinga to secure a win at the August 9 elections. 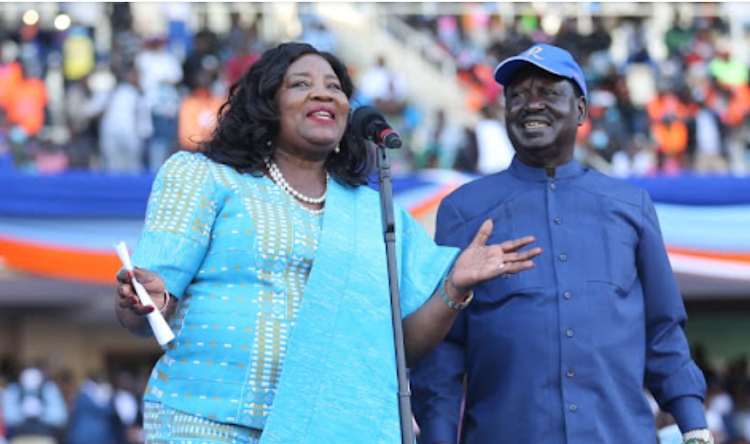 When Martha Karua was unveiled as the running mate of Azimio leader Raila Odinga, many celebrated this move.

Not because they are supporters of Azimio, but mostly because a woman had been fronted as a potential deputy president of the country.

Ida Odinga, the wife to Raila, celebrated the move and supported it saying, "I wish to congratulate Martha Karua Wangari. Her tireless work in fighting for Social and Economic human rights is having a powerful impact in Kenya. As you start a new journey of restoring the lost hope of many Kenyans I wish you good health, courage and wisdom in serving the People of Kenya as the first female Deputy President-Designate."

Ida noted, "For years, I've seen my husband work tirelessly for our Nation. I’ve seen how hard he's fought for democracy, defending the people. Each step of the way he's always had our back. This is the time to spur his legacy forward come August 9th."

Here are some reactions to her  post congratulating  Martha

Sherry Anne Omondi: Congratulations to Martha Karua. She is an inspiration to many young ladies and women. I know and believe that her story will continue to inspire many girls including my little daughter who surprised us by that she not only wants to be an engineer in future but also a pilot....as a mum I have always encouraged her that it's possible and she can become whatever she wants in this universe...and through Martha Wangari Karua, she will grow up knowing that she is capable of being an iron lady...an engineering pilot. May God keep her safe and well so as to continue serving our motherland.

Mzalendo Mzalendo: Martha’s appointment as DP gives hope to our mothers, sisters, daughters and all Kenyan women to be present at the decision-making table. It’s a historic moment. A turning point in Kenya’s history.

'Love of my life,' Raila gushes over Ida

He posted a picture of Ida under beautiful flower stems.
Politics
11 months ago

Raila said he eats foods like Githeri and Nyama Choma at his home but would not mind taking Chips Mwitu.
Politics
1 year ago

Sneakerheads noticed that Baba was rocking Nike's that were released early last year.
Politics
1 year ago
WATCH: For the latest videos on entertainment stories