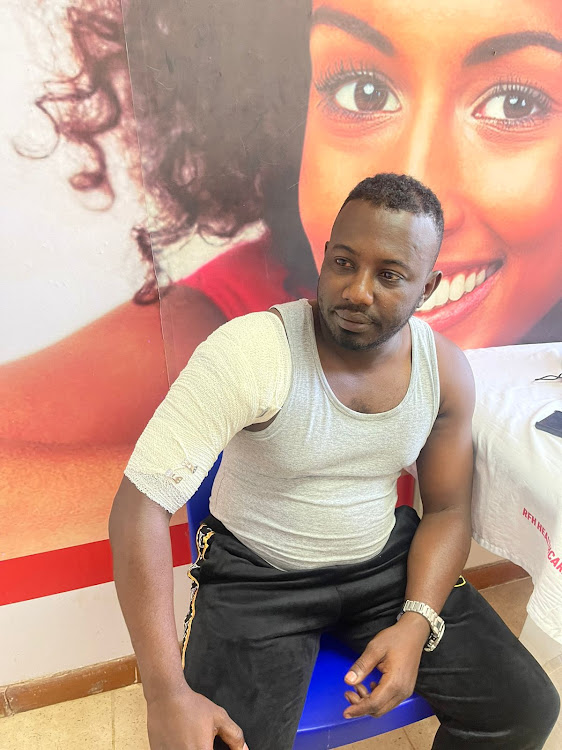 Joy Makena, the woman who was shot by Lamu Senator Anwar Loitoiptip has spoken out. In an interview with a vlogger, Makena details the events of the day.

"On that day we were taking our pal home and when we got to where the senator was, his woman we was sitting on the floor. The moment she saw us she started shouting, please help me. He was holding the mop and he was poking the woman with it. I spoke up and told the senator there us no use to hurt her just talk and agree," Makena said.

The Senator did not take the advice kindly.

One of the people that were walking with Makena, Identified as Turro said, "He charged at us. I turned to him and asked, " Buda kuna shida?".

He did not say anything, he took two steps back and hurled the mop stick at me. I moved back and it hit the tarmac and split into two.

He still picked it up again and charged at Makena and hit her with it across her chest.

Then he ran back to his car. The woman he was with shouted at us to run because he was going to get his gun. We ran into Kanu grounds and split.

Makena ran to a well-lit area and he shot at her and hit her on the leg.

I heard her call out, ' Turro, amenishoot mguu.' And she felll down. The second shot missed her narrowly and landed in the tree."

Makena explained, "When he shot me I had gotten to a tree. I grabbed the roots and pulled myself to hide from him. He shot twice and the second shot hit the tree and missed me."

Turro explained that the senator was not done.

"When I went towards her to help. He still followed me. Running as his trousers kept falling down. He was running and lifting it up. He ran past Makena who was lying down injured and followed me all the way to the entrance."

Now, they say that the Lamu senator has sent his people asking if they can settle out of court.

Turro said, "The blood that was shed was of an innocent person. It is not correct that his power and influence was used to oppress someone. Even if we talk, we have to find a settlement where there is justice and Makena is helped and her children."

A video of him loading his magazine with bullets them assembling it back has gone viral.
Crime
6 months ago