• In a statement on Monday, NTSA said the company's fleet of 31 buses had been grounded 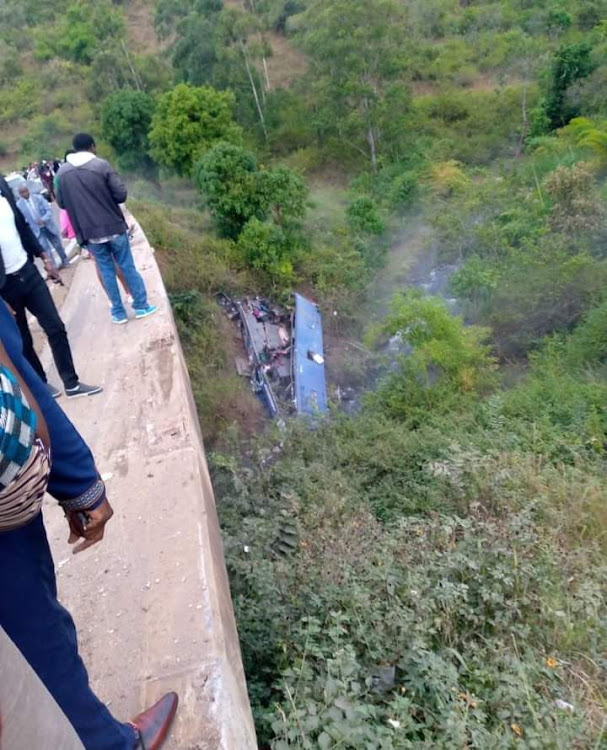 At least 34 people died after a bus plunged into River Nithi in Tharaka Nithi county on Sunday. Details of some of the passengers are being released.

One such passenger was Dr. Mary Mwandisha who died on her way to collect her job letter at Taita Taveta County. She was her family's sole breadwinner.

Another, Janith Ariop Otieno told Citizen TV that they were going to their in-laws for marriage negotiations

"When we finished we got back on the bus. On return, the bus had a problem from the start wakanganganana nayo waka start. Then we began the journey. When we got to Imenti Central the bus stopped.  A mechanic came and we disembarked. There was a slope from Meru town we noticed how the driver was driving we were curious what was wrong. We could hear noise when he tried to engage the gear, just at the scene he tried to change gear again and brake, then we saw as if the vehicle was going faster, he tried four times, then the bus flipped."

The survivor then lost consciousness as it plunged. "I then struggled to get out the passenger next to me had on a seat belt I helped unfasten it. The rest were also struggling to get out of the water. I was rescued and taken to a double cabin pickup that brought us to the hospital. They tore my clothes and gave us first aid."

He added that he doesn't know the fate of his son and daughter-in-law. "Hata sijui wako wapi nilikuwa na kijana yangu mwingine pia huko yeye amepelekwa Nairobi." His spinal cord was injured in the horrific accident.

"The bus accelerated at the slope then the driver couldn't control the vehicle but he really tried to control it, there were three corners, the third corner at the bridge is where he gave up."

The wife of the late driver of the Modern Coast bus had also complained about the bus's condition and constantly spoke of failing brakes, which was ignored by the company.

Addressing journalists on Monday, Mama Mercy said she had last spoken with her husband, Mzee Simba, over the weekend while visiting their daughter who is in boarding school.

She was speaking outside the bus company’s offices where she had gone to confirm that her husband was indeed the one behind the wheel of the ill-fated bus.

Police officers and rescue teams at the accident scene said the bus likely lost brakes, hitting an oncoming vehicle before plunging 40 feet into the river below.

Several people are feared dead after a bus plunged into River Nithi in Tharaka Nithi county on Sunday.The bus belonging to the Modern Coast
Lifestyle
2 weeks ago

At least 33 people were reported dead after a Mombasa-bound bus they were travelling in plunged into River Nithi along the Meru-Nairobi highway on ...
Lifestyle
2 weeks ago

Jecinta Murugi 27 years, was brutally stabbed to death by the husband before he turned and chopped off their daughter’s head Saturday.
Crime
9 months ago
WATCH: For the latest videos on entertainment stories