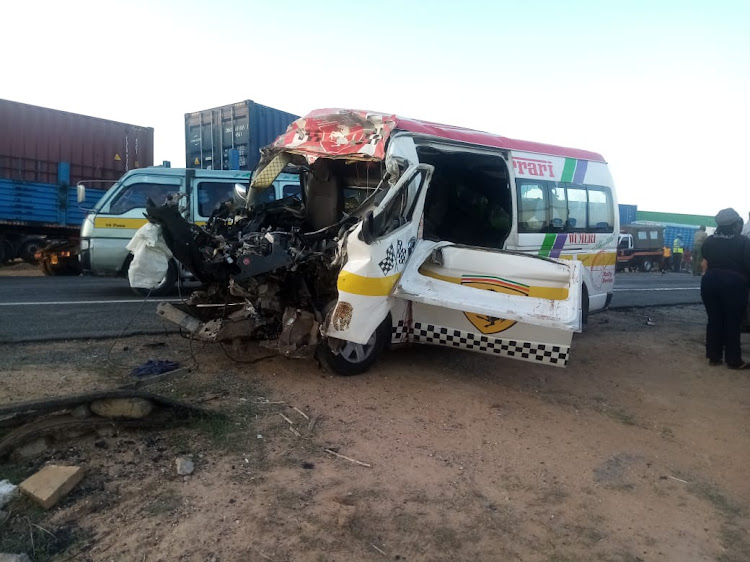 The catastrophe that left 21 persons dead on the Mombasa-Nairobi Highway on Friday night saw a lone survivor emerge from that road disaster.

The matatu carrying eight people from the Mgeno Pefa Church in Mwatate to Mombasa for a wedding crashed into a lorry close to Taru in Kwale County, according to Pamela Chae, 21.

The horrific road accident that happened at around 6 o'clock claimed the lives of several people, including her 4-year-old son.

Chae was hospitalized at Mariakani District Hospital after suffering fractures to both of her limbs.

She told KTN News, “God has given me a second chance. The diver tried to veer off the road when he saw the incoming lory but it was too late."

The body of their child, who perished in the collision, has not yet been found, according to her husband Arthur Mwakale.

Mwakale stated, "I lost my son, but I still praise God for preserving my wife."

However, Mwakale said that his sister-in-law, Ester Kandi, was also in the unfortunate van and was admitted to Coast General Hospital.

Yesterday, Kinango OCPD claimed that Chae was the only survivor.

The matatu's driver, Benedict Mwandawiro Mwakilemba, has been identified. According to the police report, Mwakilemba and his conductor passed away immediately.

Those killed in the unfortunate tragedy were family members traveling to a wedding in Mombasa and a pastor from Mwatate named Ben Mdawida.

The pain of loosing  eight residents from th same local - a small tranquil village of Mgeno - was excrutiating.

Villagers who were speechless flocked to the home of the deceased to comfort the family members after the tragedy.

As a presenter, I was trolled for having a bishop day - Joedebestt
Entertainment
1 month ago

"We’ve heard about these stories like Jay-Z or other artists joined the Illuminati to get rich and powerful, and here in Africa people believe in ...
Entertainment
2 months ago

Survivor series episode 42 premiered on March 9, 2022, on CBS in the United States and Global in Canada. It ended on May 25, 2022.
Entertainment
2 months ago
WATCH: For the latest videos on entertainment stories