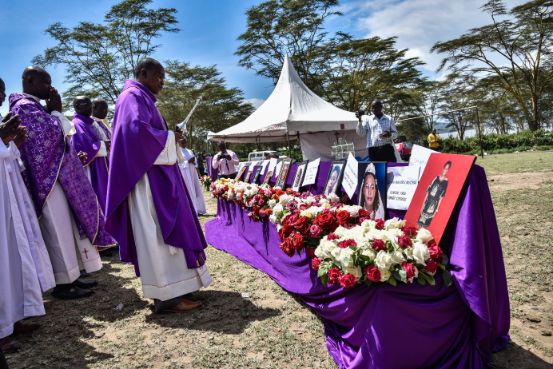 Catholic priests pray for the nine mourners who died in a road accident in Mai Mahiu Naivasha during a joint requiem mass at Kongoni center in Naivasha on 27/5/22. The nine were among mourners who were returning back to Naivasha from Kisii after attending a burial of a colleague when their mini-bus was hit by a lorry ferrying sand along the Mai Mahiu-Narok road.
Image: GEORGE MURAGE

Tears flowed freely, prayers were recited and some kin fainted as families of the nine mourners killed in a road accident in Naivasha last week came to terms with the loss.

This emerged during a joint requiem mass for the nine held in Kongoni trading centre in Naivasha ahead of their burial in different places.

During the emotional service conducted by the Catholic church, the Nakuru county government waived all the medical fees incurred by the nine and the five patients still admitted in the hospital.

On Saturday, a group of mourners heading to Naivasha from Kisii were involved in a grisly road accident along the Mai Mahiu-Narok road leaving nine dead.

A mini-bus they were travelling in was hit by a lorry ferrying sand killing seven on the spot while two others died while undergoing treatment.

While condoling the bereaved families, Nakuru Governor Lee Kinyanjui expressed his concern over an increase in the number of accidents in the county.

Kinyanjui said that the county would continue to offer support to the affected families as they planned to bury their loved ones.

“The county as part of supporting these families has waived all the medical fees that were incurred during their treatment,” he said.

The Governor pointed to drivers of sand lorries as the main culprits of careless driving adding that bad decisions had left many families mourning.

On her part, Naivasha MP Jane Kihara termed the accident as traumatising adding that they would continue supporting the affected families.

She praised the medical team at Naivasha hospital for working overboard to treat those injured during the 2am accident.

“This accident has taught us that we are one family and we should continue to support each other regardless of our party affiliations,” she said.

One of the relatives James Nyakundi noted that he lost a sister moments after burying another kin on the day of the accident.

“Those mourners had come to our home for a funeral and we parted well only to get calls hours later that they had been involved in an accident,” he said.

Another relative, Christine Nafula noted that the majority of those who died were young people who had young families.

“Many of those who died have left very young families and are appealing to the county and other leaders to continue supporting them,” she said.

Others who spoke were Maella MCA Gathariki Kamanu who thanked the county for waiving the medical bills.

“The driver of the sand lorry was to blame for this accident and we shall continue to pray for the five mourners who are still in hospital,” he said.

'How to murder your husband' author, found guilty of husband's murder

Nancy Crampton is the author of 'How to murder your husband.'
Crime
1 month ago

Oscar Brown passed away on Monday in Asaba, Delta State
Crime
1 month ago

Mombo was allegedly attacked at his doorstep by four men with rifles, one an MP aspirant today
Crime
1 month ago
WATCH: For the latest videos on entertainment stories