Mombo was allegedly attacked at his doorstep by four men with rifles, one an MP aspirant today

• Mombo said Dishon Mulinge, aspirant to Embakasi S. MP seat, was one of four men who attacked him as he came home on November 1, 2015.

• “Your Honour, for the one year I had stayed in that house not me nor my wife had ever received a visitor," Mombo said. 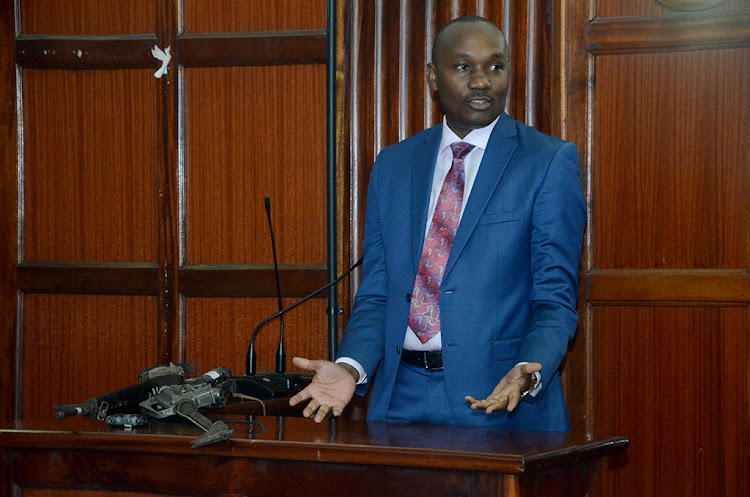 Mombo said Dishon Mulinge, aspirant to Embakasi S. MP seat, was one of four men who attacked him as he came home on November 1, 2015.
Image: Douglas O'kiddy

Mombo told court Dishon Mulinge — an aspirant for Embakasi South MP — was among four men who attacked him at his doorstep as he came back home on the night of November 1, 2015.

He said it was a normal day but at his door Mulinge and three other men armed with M-16 rifles accosted him, blindfolded him and took him inside Mulinge’s house next door.

Two rifles were presented in court as exhibits. They allegedly tied both feet and hands and took valuables from him then hurriedly left the house.

After 20 minutes he crawled to the balcony and screamed for help. Security guards responded swiftly and police were called.

While being cross-examined by Mulinge’s lawyer, Danstan Omari, Mombo said he did not know the motive of the accused persons who robbed him.

But he said he remembers the day vividly, as if it were yesterday. Omari asked who else visited him when he lived at the apartments on Ole Dume Road.

He said he never received a single visitor, nor did his wife.

“Your Honour, for the one year I had stayed in that house neither me nor my wife had ever received a visitor,” Mombo said.

Omari further inquired if that was not suspicious and out of the norm that they had never had any visitors. Mombo said he didn’t see it as being suspicious because it was their choice.

Once he identified Mulinge in the parade, Mombo said he recognised Mulinge’s voice because he had allegedly called him sometime later asking for Sh20 million as “ransom".

The case however took a twist when Mombo disowned one of the witness statements that had his name on it, saying it did not belong to him.

Omari told the court that the prosecution had supplied them with the two witness statements. One was recorded at 9.20 am and the other at 11 am, bearing his signatures.

The prosecution said there are indeed two witness statements but they will be relying on the detailed one and they are not sure if both were supplied to the defence.

Omari asked the court to order a forensic investigation to ascertain whether the signature on the disowned statement belonged to Mombo.

He further said if it turns out to be fake, then the DPP will have to explain why they forged the signature but if it is Mombo’s, then he will face the law for lying to the court.

Magistrate Robinson Ondieki directed Omari to file a formal application so the prosecution can respond before he makes a ruling.

Mombo was stood down and he will be recalled once a ruling has been made to continue with cross-examination.

The case will become up on June 2 for directions and the court had allowed an application by Mulinge not to be in attendance because he will be busy on the campaign trail.

A pastor together with his two accomplices were arrested by sleuths. The three had terrorized residents of Nambale town who had lost a number of ...
Crime
9 months ago

Lawyer Cliff Ombeta speaks out after actor Ainea Ojiambo's gun is taken by police
Lifestyle
1 year ago
WATCH: For the latest videos on entertainment stories

Check out the latest news here and you are welcome to join our super exclusive Mpasho Telegram group for all the latest and breaking news in entertainment. We would also like to hear from you, WhatsApp us on +254 736 944935.v