The cute story behind Hart the Band's 'Babaa' tag

• When listening to the album, you will hear Mordecai's three-year-old daughter, Alika.

• Hart the Band's Mordecai proudly explained how Alika has the music gene just like he does. 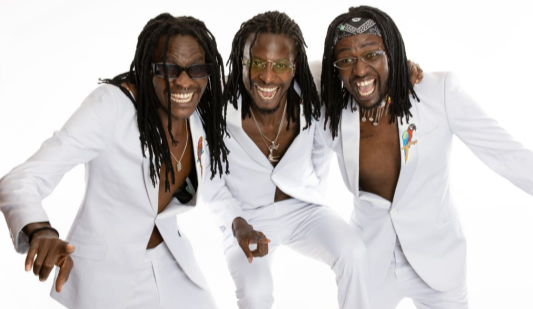 Lead vocalist Mordecai Dex has enlisted the help of his three-year-old daughter for their fourth Studio album titled Party Time.

This time around, Mordecai has also worn the producer hat in this new album.

Speaking to Mpasho, he said, "I have always been intrigued by the process of seeing an idea move from just a simple melody in my head or random words into a full-blown hit song that makes people feel things or even change their lives in a way or two."

Talking about his process during the producing and recording of Party Time, Mordecai said, "I have been writing and producing behind the scenes for other artists' projects so once the opportunity of producing for our latest album "Party Time" presented itself, I was more than ready to grab it."

When listening to the album, you will hear Mordecai's three-year-old daughter, Alika make a debut.

Mordecai explained, "My daughter Alika did my official producer tag and that was so special to me, that we had to have her featured on the album. So the next time you hear "Babaa" in a track, just know I had a hand in it, literally."

"Alika has always loved singing for as long as I can remember. She's also very sharp so when she hears something she likes, she naturally just sings along to it," he said.

"I simply create a safe space for her to have fun while doing it. No pressure at all. We've done a lot of TikTok's together so when the time is right we'll share with the world."

Little miss got her first feature just like that. She warms me up inside #PartyTime #EasyLikeABC #DaddyDuty #SingAlongKaraoke #NewAlbum #PreciousMoments #RaisingAlika

"We've grown immensely in terms of skill and knowledge and our perspective is wider now more than ever," the Uliza Kiatu star added, "Versatility is another strength of ours as you never really know what to expect when H_art The Band drop a body of work. Shout out to all our fans for sticking with us since the beginning of this crazy journey. Expect nothing short of greatness from us in this project and the projects to come."

The new album houses 7 amazing records crafted to paint an image of celebration and evoke happiness.

Asked about the inspiration behind this music project he explained, “The past two years or so, have proved to us all how fragile life can be and we saw the need to do an uplifting body of work. Something you can both listen to as well as dance to.”

Fellow bandmate Kenneth ‘Kenchez’ Muya added, “Party time is a celebration of love, good times, friendships, family and generally a celebration of life. When you get to listen to this album, you will feel a sense of growth in the sound, lyricism & vocally. I can confidently say this is our best work yet.”

“With this album, we would like to encourage everyone to be easy on themselves and to always find the time to celebrate their wins no matter how small,” Skoko added, “Personally, I have been tried and tested in the making of this album. My brothers pushed me to use my vocals. It was challenging at first but I love the results."

I will teach my daughter when to stop loving - Amber Ray

Wamuratha was impressed by Wonder Chibalonza's melodious voice
Entertainment
4 months ago
WATCH: For the latest videos on entertainment stories