• She revealed that De Mathew named her son Simba. 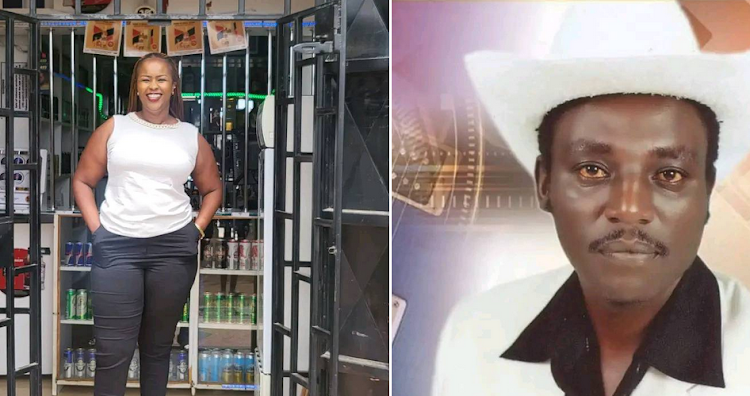 Caroline De Mathew, the second wife to the late Mugiithi artiste is proud of the growth of their lastborn child Wayne alias Simba.

She described her son as a priceless gift adding that she sees her late husband through him. She revealed that De Mathew named her son Simba.

"17th January 2017, 10 pm...@ The Aga Khan hospital Nairobi. I received my second gift of my womb from God...His brother Named him Wayne...I Named him Matthew...His Dad Named him *Simba *Am the happiest Mummie today...my baby turns 6 years. My priceless gift, My pride, when I look into your eyes, I see Dad... I Thank God for the gift of a wonderful Son... God protect him for me... Happy birthday Little Demathew."

Carolyne De Mathew left her matrimonial home a few months after her husband died. She now runs a wines and spirit joint in Ruiru which she markets through her Facebook page.

In a past Facebook live session with her fans, Carolyne shared some of her favourite music from her late husband as she interacted with them.

One of the fans asked her how her son with De'Mathew is doing.

"My son 'Simba' is now big and I will come with him in my next live session," she said.

Carolyne Waithera said that only one of her late husband’s friends has been checking up on her after everyone abandoned her.

Carolyne also announced to their fans that she was thrown out of the home she shared with her late husband.

She wished the deceased would come back and see how his friends turned their back on her.

"I swear Njogu was your friend. He has been checking up on me and your little Mathew, Simba," Carolyne wrote.

"I wish you knew how your family treated me as well after your demise. They even threw me out of our house, where I gave birth to your son."

Matthew's first wife has been sending cryptic messages on social media after Carolyne spoke. A few days ago, Sarafina said people will build you thinking they are breaking you.

To my genuine friends, fans and DeMathew's friends and fans, I am doing fine and better," she wrote.

The music icon rammed into the back of a moving truck near Blu Post Hotel along Thika Road two years ago and was pronounced dead on arrival at the hospital.

'Someone pay my dowry...' De'Mathew's second wife speaks out

Carolyne De'Mathew said her story is a long one but promised to one day she would share with them.
Entertainment
5 months ago

John De Mathew passed on in 2019 after a fatal car crash. He left behind two widows, Sarafina and Carol who have maintained a close friendship but ...
Entertainment
1 year ago