• The man returned to the scene to try and rescue her. 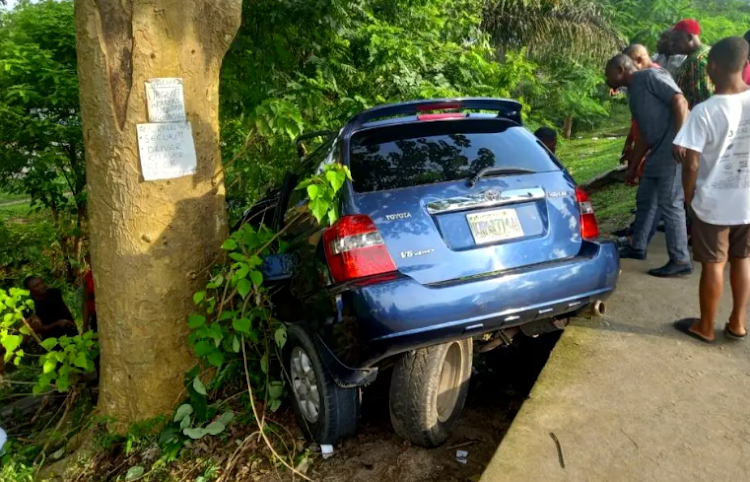 Woman dies in car accident while cashing husband and 'Side Chick'.
Image: Twitter

Authorities in Nigeria have confirmed a single incidence that resulted in the death of a middle-aged woman in Calabar, Nigeria when she was hotly pursuing her husband over his "mistress."

According to the FRSC Sector Commander in Cross River State, Maikano Hassan the woman passed away while receiving treatment in hospital.

"Though the woman was immediately rushed to a nearby hospital, she was said to have died a few minutes later due to the injury sustained from the incident,” Maikano Hassan said.

When the woman lost control of her car and killed herself, it was reported that she was chasing after her husband, who was believed to be in a car with a "side chick."

A Twitter user Mighty Mohammed also used his handle to narrate the unfortunate incident. The wife spotted her man and another woman and gave them a chase.

"Apparently the lady in this car crashed on a high speed chase; chasing her husband and his side chic after she spotted them shopping in Spar Calabar."

A video of the car wreck shows a crowd of onlookers milling around the vehicle wondering how to rescue her.

"The husband quickly dropped off the side chic and came back to help rescue her from the crash unconscious. She’s in a hospital now" 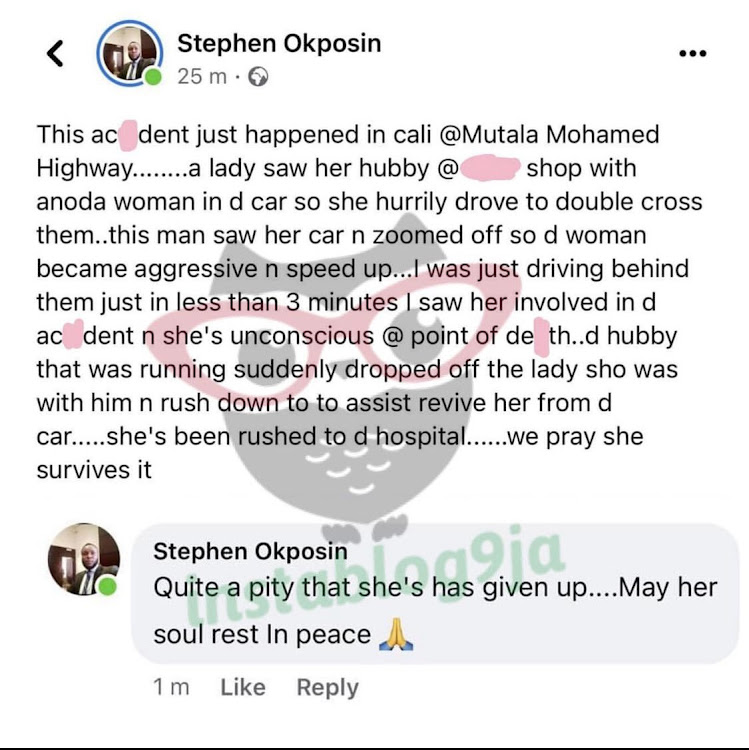 Netizens have reacted to the news of her death;

UgoNwa@FabBellz·Everybody under this thread typing “to what end” “she died needlessly” “because of man”? U all really don’t know what pain is. It takes so much wisdom and experiences to handle this level of hurt sha. NB ladies learn to stop acting out asap. Stop and think first.

UgoNwa@FabBellz·Everybody under this thread typing “to what end” “she died needlessly” “because of man”? U all really don’t know what pain is. It takes so much wisdom and experiences to handle this level of hurt sha. NB ladies learn to stop acting out asap. Stop and think first.

@IcyRosse·She overreacted yen yen yen until you find yourself in the same position & adrenaline pumps into your brain &you become consumed with rage & lose every sense of reasoning bcos why the hell is your life partner betraying you especially if you've been faithful? Why didn't he leave?

@Ifeade_Lu·I’m not losing my life for no useless man . A good man will never put you in a position where your kids will watch them lay you to rest !! May him and his side chick know no peace !!! It’s not hard . If you’re not happy .. leave don’t cheat . Only cowards cheats

@King_obidike·Imagine dying because of a man that refused to be responsible, chasing and endangering your life because of someone not Worth it. May her soul rest in peace, so sad she lost her life in such a tragic way with a heavy heart

Men reveal why they ditch their wives for side chicks

Camilla was a side chick to King Charles  before and after he married Princess Diana.
Entertainment
1 week ago

Nominated Senator Karen Nyamu has broken her silence after being branded by a fan as a ‘husband snatcher.’
Politics
2 weeks ago
WATCH: For the latest videos on entertainment stories