As a presenter, I was trolled for having a bishop day - Joedebestt

• The journey to becoming the current Str8 Up presenter was a tough one for Joel Masuti alias Joedebestt.

• The young TV personality says he had it rough because his dad was against his career path because he had to protect his reputation as a Bishop. 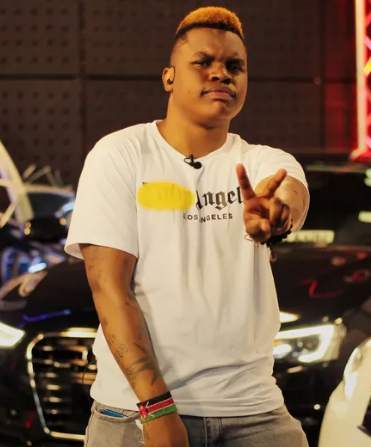 The journey to becoming the current Str8 Up presenter was a tough one for Joel Masuti alias Joedebestt.

The young TV personality says he had it rough because his dad was against his career path because he had to protect his reputation as a Bishop.

Speaking to the writer, Joedebestt says his mom was very supportive but he had to play some sort of reverse psychology on his dad to win over his support.

"My dad was against what I was doing because of his reputation as a Bishop but he ended up supporting me 'cause I told him if he wants me to come stay with him, I'll stop what I was doing and that he should be ready to always give me money whenever I wanted it. So so he had no choice but to support me," he said.

Joedebesst is a born again Christian and Str8up being a show that focuses on everything revolving around the Showbiz, it meant he'd face so much backlash from those who know him.

"I will be honest with you my dad prays for people and heals the sick, so a lot of people said that all the demons that my dad casts out of people came onto me, which hurt my feelings so much but I become so tough and knew that I haven't seen anything yet."

For him to land the gig back in October 2021, he had to compete with other talented presenters and had to go through a rigorous process to emerge the winner.

He says his fluency in the English language, his charisma and energy gave him an edge over hundreds of other aspiring presenters?

Joedebestt says growing up he was a comedian and a dancer who was actively involved in drama and music festivals where Joe scooped awards as best actor.

That explains why singing, watching comedy and animation movies rank high among his hobbies.

When he finished high school he went to study IT where he dropped out of school because he needed to survive by getting work and not depending on his parents.

As a natural hustler he once landed a job in a casino entertainment where he worked for 4 years. Soon after, he had the privilege to travel to Hong Kong for work where he worked for a short period before he was forced to return home due to Covid-19 pandemic.

But does he plan on on going back to school and finish his course?

"Definitely yes I will go back to school because I am aiming to get my degree on IT so mungu mbele." He said.

The deep voiced presenter who is also a YouTuber, revealed he is very much single and ready to explore.

How does he handle handle fame and trolls who have been on every celebrity's neck?

"Its not easy I will for sure tell you that everywhere I go, people see me as bank which is so irritating and also there are places I can't be seen or things I can't do like before which is so tough. I haven't yet started receiving trolls but I know they are on the way soon," Joedebestt said.

Former Selina actress Irene Njuguna aka Maggie found it difficult to proceed during the recording because her religion prevented her from engagin in ...
Entertainment
2 months ago