Kennar depicted a situation where Lulu Hassan is angry with Rashid

• Kennar and his fellow content creator Stanely imagined a situation where Lulu Hassan was beefing with Rashid Abdalla on air because he danced with Jovial. 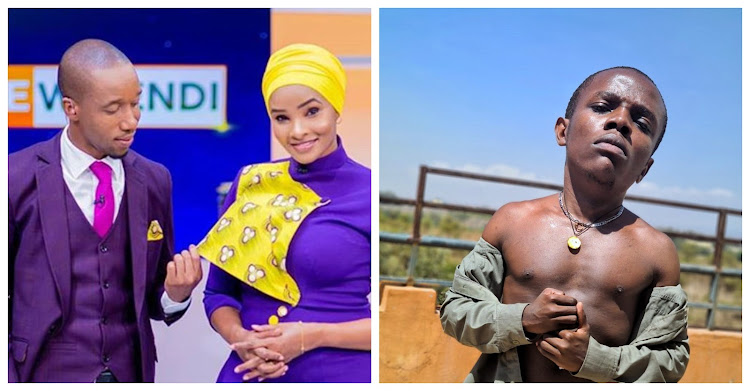 TV presenters Lulu Hassan and Rashid Abdalla have been taking the entertainment industry by storm while serving couple goals.

A video of Jovial serenading 'birthday boy' Rashid Abdalla went viral on social media, with the interesting part being when his wife Lulu Hassan stepped in to stop the dance.

Now, comedian and content creator Crazy Kennar has created a video depicting a 'tense moment' that might have happened between Lulu and Rashid after the stints from Jovial.

In his comic video, Kennar and his fellow content creator, Stanely imagined a situation where Lulu Hassan was beefing with Rashid Abdalla on air because he danced with Jovial.

With Kennar acting as Lulu Hassan, he would interrupt Rashid Abdalla's presentation to remind him of his dance with Jovial.

While 'Rashid' was doing an introduction of the news bulletin, 'Lulu' was interrupting him

A post shared by Tales of the Crazy Kennar🇰🇪 (@crazy_kennar)

The video of Rashid Abdalla's lit birthday party has been causing a storm on social media, with netizens saying Luly was protecting his man from Jovial.

Addressing the issue, singer Jovial said it was not kind of Kenyans to have ill thoughts about the situation yet she was just doing her work, entertaining clients.

Jovial says Rashid Abdalla and Lulu Hassan are her bosses and she was only doing her job at the birthday party.

"The insults on the trending video of me at work... Ok, I'm just seeing women projecting their insecurities on an innocent act! Mumepata kisababu ya kufungua roho! (You got a reason to pour out your heart)," Jovial wrote.

The Mi Amor hitmaker said her video gave women the freedom to speak freely on the internet about their private and most deeply felt emotions.

"You can tell they are dealing with a lot in their homes! The couple is my bosses those who know the series know better!

Fix your homes and stop using me as an excuse! I'm an entertainer and I was doing my job! By the way, I was paid very good money. Cheers to more."

Crazy Kennar reveals how much he earns and his bad habit

Kennar is a forgetful person
Entertainment
1 month ago

Crazy Kennar's speaks on his battle with mental illness
Entertainment
1 month ago
WATCH: For the latest videos on entertainment stories