Last moments of Mpesa attendant before her death

• Other neighbours rushed to the shop and took the woman to a hospital as others screamed for help to stop the gang. 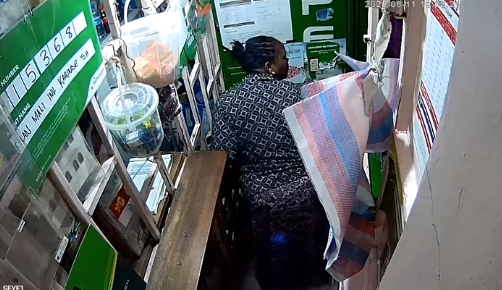 MURDER AT THE WORKPLACE: On the night when the incident happened, Gathoni was captured on the security camera preparing to close her Mpesa shop at about 7 pm.

An attempt by a gang to rob a shop in Nairobi’s Adams Arcade turned fatal after they shot and killed a man and woman in a dramatic incident partially captured on CCTV camera.

Detectives handling the June 11 incident said they are looking for known suspects who have been linked to the same.

Those killed have been identified as Sophia Gathoni Maina, 53, and Paul Githinji Gitau, 50.

They are not related.

Gathoni was shot and fell in her shop while Githinji was hit outside as he responded to screams from the woman.

Gathoni succumbed to her injuries on Tuesday, three days after the incident while Githinji died on the spot.

On the night when the incident happened, Gathoni was captured on the security camera preparing to close her Mpesa shop at about 7 pm.

Then someone called saying he wanted to buy cigarettes from the shop but she directed him to another shop.

Police believe the man was part of the gang that attacked her as he then followed Gathoni to her shop in a confrontation before he opened fire as the woman fought back in an attempt to stop him from getting in.

An accomplice tried to force himself into the shop but Gathoni fought back and got out where the gunman shot her at least two times.

The gang, which witnesses told police that they were three, ran out of the shop as the deceased woman screamed for help.

She had been hit in the hand and chest.

Other neighbours rushed to the shop and took the woman to a hospital as others screamed for help to stop the gang.

They shot to the air and indiscriminately. It was then that they hit Githinji who was among those responding to the distress call.

A witness said he realized Githinji had been hit in the head by the gang and helped to rush him to Nairobi Women’s hospital a few meters away where he was pronounced dead.

“He had gone to buy some fruits and I rushed there and found him bleeding from the head and mouth,” said the witness.

Gathoni was admitted to the Intensive Care Unit where she succumbed to her injuries on Tuesday. Gathoni’s son Eric Kamau, said her mother was hit three times.

A post-mortem was conducted on her body on Wednesday.

Police took bullets removed from the bodies to the National Forensic Laboratory for ballistic examination.

The families of the victims have recorded a statement at Kilimani Police Station, with the Police Commander Muturi Mbogo saying detectives are investigating the incident although no suspect has been arrested so far.

He said they are pursuing known suspects for now.

“They have been profiled and we are pursuing them,” he said.

He added they are investigating to establish if the gang was behind some of the robberies reported in the city.

They then use the money to live lavishly, entertain beautiful babes and buy properties.
Crime
2 weeks ago

"It is saddening to lose two people at their places of work in the hands of armed gangsters." - DNG
Crime
2 weeks ago

Police say the items were recovered in Kawangware last night in an operation.
Crime
2 weeks ago