She was speaking on Monday during a thanksgiving prayer organised by Homa Bay Woman Representative Joyce Osogo in Homa Bay Town.

• She said even those who contested and failed to get the positions also put the blame on Raila.

• She added that those who made frequent visits to the family have abandoned them. 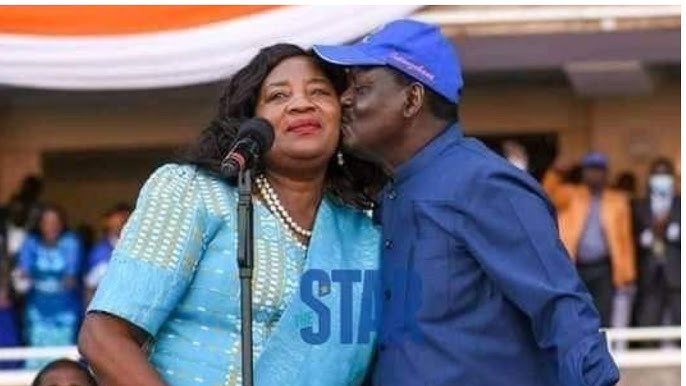 Ida Odinga has asked politicians to stop making fun of her husband's loss.

Ida Odinga has reprimanded a section of leaders from the Nyanza region for attacking her husband, ODM leader Raila Odinga, over the August 9 elections.

She said some leaders from the region have been blaming Raila for their losses in elections.

She was speaking on Monday during a thanksgiving prayer organised by Homa Bay Woman Representative Joyce Osogo in Homa Bay Town.

She said even those who contested and failed to get the positions also put the blame on Raila.

"The same politicians who would wake up and come to my home for breakfast, lunch and supper and spend the whole day at my office are now insulting members of my family," she said.

She added that those who made frequent visits to the family have abandoned them.

"They are forgetting that they used to frequent my home, pretending to be close to us," she said.

She urged leaders not to make fun of Raila's loss.

Mama Ida said those trying to dismiss Raila in the political scene have selfish interests.

She said some leaders are now using social media to paint the family in a negative manner with hopes to be noticed by the current regime.

“Those making noise on Facebook with intentions of seeking state recognition are wasting their time,” she said.

Saitabao Kanchory, the chief agent for Raila Odinga's Azimio party during the August general elections now claims that the ODM only listened to one ...
Politics
1 month ago

Why Jalang'o is opposing move to create office of opposition leader

Phelix Odiwuor alias Jalang'o, MP Lang'ata, is opposing the establishment of the office of the opposition.
Entertainment
1 month ago

Winnie Odinga to be summoned for missing Ruto meeting

Gitonga Mukunji, the Manyatta MP has said Parliament will summon Winnie Odinga for failing to attend an EALA meeting convened by President William ...
Politics
2 months ago
WATCH: For the latest videos on entertainment stories