Ruto to CS spouses-Your partners may sleep in office

“Thanks for your support and we promise to do our best,” he added.

• He thanked the families for the support they have granted the ministers since they were nominate.

• “Thank for your support and we promise to our best,” he added. 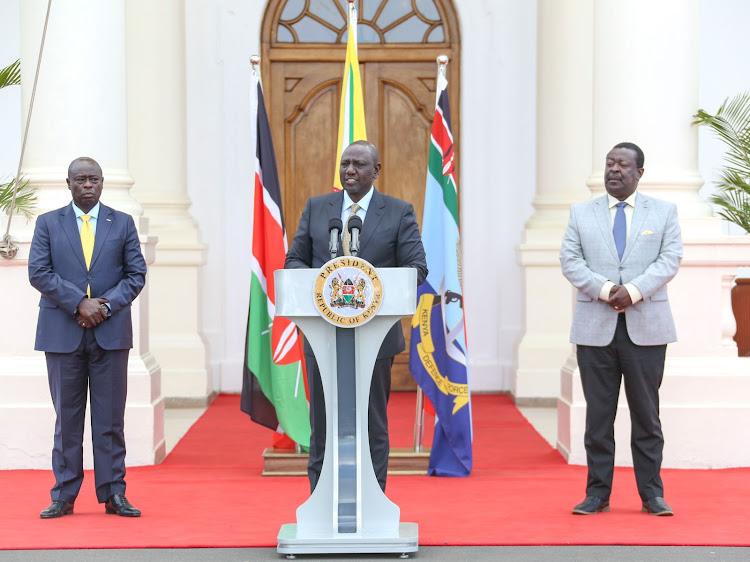 President William Ruto has asked the spouses of his Cabinet to be understanding if their better halves don’t get home.

Ruto who was speaking at State House, said the spouses should understand that the work that is being done needs focus.

“You will be leaving your office late. Spouses please understand these people because they will be sleeping in the office in the next couple of months,” he said.

He thanked the families for the support they have granted the ministers since they were nominate.

“Thanks for your support and we promise to do our best,” he added.

Ruto also asked the CS to fully in charge of their ministries.

"You should be as concerned in what happens in the next ministry as you are in your ministry," he said.

The head of state also highlighted that he was looking forward to listening to his cabinet and their  advice so that the government can manage the affairs of the nation.

"Even though I stand here as president I do not have the monopoly of all knowledge," Ruto said.

The President also asked the cabinet to serve all Kenyans equally, forgetting the tribal lines.

"I know that there are regional persuasions but I’ve not appointed any Cabinet for any region or county, I have appointed the cabinet of Kenya. I expect everyone to serve Kenyans equally," Ruto added.

In addition, he asked the cabinet to uphold the rule of law and respect the constitution.

"You have sworn to serve the people of Kenya. I expect all of you to uphold the constitution and the rule of law to be front and centre in the administration of our government," Ruto said.

President William Ruto has done away with Kazi Mtaani Programme, which was a movement and project of former President Uhuru Kenyatta.
Politics
1 month ago

Pakistani PM Shehbaz Sharif said he requested President William Ruto to ensure that there is a transparent investigation into Arshad's killing.
News
1 month ago