• The bottom up struggle is still on as he compared Mama mboga to the rich fellas, saying they are all same and should pay tax.

• He made his assurance,promising not to fail citizens as the way that programme failed before. 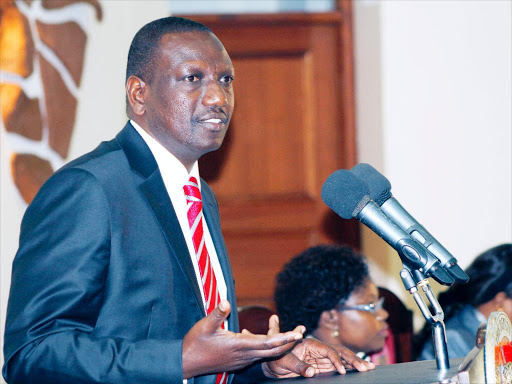 President William Ruto has done away with Kazi Mtaani Programme, which was a movement and project of former President Uhuru Kenyatta.

He abolished it during the groundbreaking of Soweto East Zone B Social Housing in Kibra, Nairobi County with the Head-of-State also promising the youth a great deal.

He said that he will include the youth towards contribution of affordable housing plan in the country. He started;

"Kazi Mtaani is outdated now, the work now is building these houses, and the first people to get jobs in this project will be from Kibra."

He added that the number of youths being employed under the Kazi Mtaani program was minimal.

"The 500 youths per ward hired in the Kazi Mtaani program will be used to construct these homes. You asked for job opportunities, here they are."

Ruto argued that his latest move was meant to empower the Jua Kali industry.

"The urbanization rate in Kenya is 4.4 per cent therefore we must ensure our people have good and affordable houses. In Makongeni, we plan to construct 55,000 houses."

The head of state stressed that his government will pay attention to changing informal settlements in the country.

He pledged not to fail citizens recounting how the scrapped programme failed before. He also urged Kenyans who don't pay their fair share as far as taxes go.

"If the mama mboga can afford to pay Ksh50 to the Kanjo why should the rich not pay taxes. Let everyone ensure they pay taxes, if you notice an individual at your place of work not paying taxes report it to the authorities,"he finished

Will KRS be more people-friendly? KOT reacts
News
2 months ago

• A calm and collected Ruto said he had an explicit plan on how he would reduce the cost of living should he win the August 9 general election. • Ask ...
Politics
4 months ago