He said there are about 15 taxes on fuel, but could not specify

• A calm and collected Ruto said he had an explicit plan on how he would reduce the cost of living should he win the August 9 general election.

• Ask what this plan entails, the Deputy President said reduction of taxes on imported fuel was part of his mega plan to ease the burden off Kenyan households. 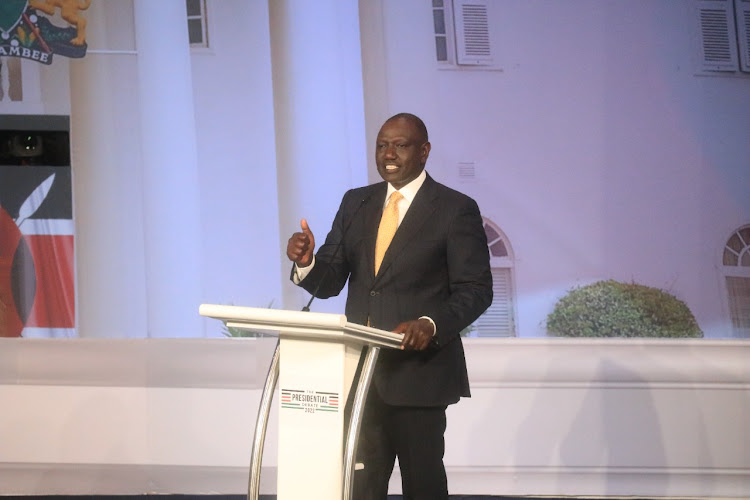 William Ruto, the UDA presidential candidate, ran into difficulty during the presidential debate on Tuesday night while listing his ideas for lowering the cost of living.

When asked about his specific pledge to lower living expenses should he prevail in the general election on August 9, Ruto responded coolly and collectedly.

When asked what the proposal entailed, the Deputy President stated that one of his methods for relieving Kenyan households of their financial burden included lowering tariffs on imported fuel.

According to him, there are roughly 15 separate taxes charged on fuel that raise the price of the good. Ruto said that it was paramount for his government to determine which of these 15 levies can be disregarded in order to lower taxes overall.

"In Kenya, taxes account for over 50% of the cost of petrol. I believe it's time for the nation to consider other revenue-generating options," he added.

However, when moderator Yvonne Okwara pressed him to list the precise taxes he believed should be eliminated, the DP said that he lacked the specific details.

However, Ruto claimed that the VAT tax, which was just recently imposed on fuel, is one of many that has to be reduced or completely eliminated.

But Ruto said to rectify this, Kenya needs to look for alternative ways of raising revenue to repay the loan, or even better, re-negotiate with the International Monetary Fund over the loan repayment condition.

"I think any reasonable government looking at the situation where we are, looking at the cost of living and how many Kenyans are every day sinking below the poverty line, I think it takes a courageous government to sit down with our development partners and they are fairly reasonable people, and have a discussion," Ruto said.

"We need to renegotiate on some of the items that are outstanding," he added.

But Ruto argued that in order to fix this, Kenya must explore other revenue-raising opportunities or, even better, renegotiate the loan repayment terms with the IMF.

Following the introduction of a Sh16.675 billion subsidy by the government, fuel prices were unchanged in July.