(Video) Here is what retired President Uhuru is doing now

• Uhuru told a friendly crowd some of his plans based on their questions.

• Since retiring from his political career, Uhuru has been relaxing. 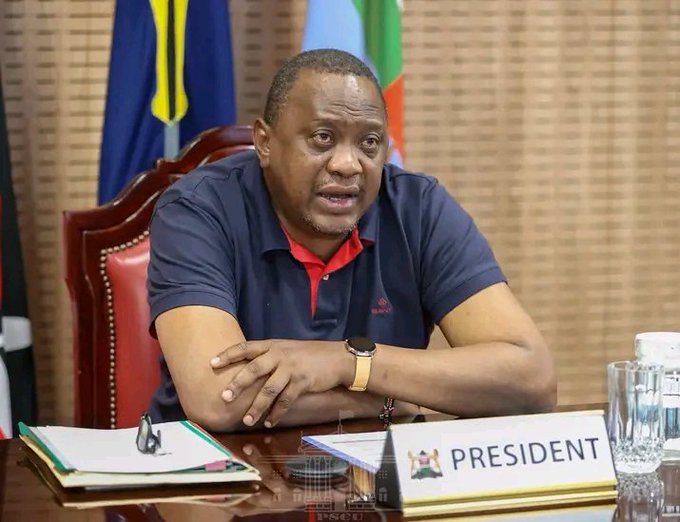 Ex-President Uhuru Kenyatta. He is allegedly to have built his retirement home in Narok.
Image: Twitter

Here is what retired President Uhuru is doing now. Uhuru has been spotted enjoying himself post State House.

The former president was spotted yet again enjoying his retirement. After spending the last ten years clean shaven in suits we think Mr Uhuru deserves a break.

And while he may have left his career in politics behind, Uhuru Kenyatta is truly the definition of a man enjoying his retirement from politics.

A video is trending of Kenyatta, driving a Mahindra double cab vehicle, with three other passengers. The father of 3 has time to explore the country. The man is keeping busy, privately and we love it.

Sometimes privacy may not be very private as he appears somewhere and Kenyans make sure to record their encounter with him.

The latest is of Uhuru driving and appears to be driving past a group of bikers. He pulls up slowly to the group of men, and smiles broadly. "Habari yenyu?" he asks.

The men respond "salama sana" one man greets him as another approaches the Mahindra to shake his hand saying "long time".

Uhuru agrees that it's bee a long time then he notices their bikes and asks "you're travelling around Kenya on your bikes?"

They nod their heads, telling him their bikes are made in Kenya. This seems to make Uhuru impressed. "Well I hope you are having a good time mimi nitakuja ku wa join."

They encourage him to do so. The retired Head of State is known to love mingling and he is happiest either dancing or asking people how they are doing. Uhuru then proceeds to ask the group of men in bikes if they are okay.

Uhuru spent significant time talking to the men who responded excitedly, asking about his plans as well with the former head of state telling them about his future plans.

The other one time he has been seen in public was in Narok October 15 where he donated a bus to a primary School.

He was photographed standing exiting a building and appeared to be talking to a group of individuals standing in front of him.

In photos shared online, Uhuru, wearing a casual look, a red and black horizontal striped shirt and khaki trousers, was seen walking around the luxurious lodge by himself.

He was at Partakilat Primary School, Lolgorian, honouring his promise to the school children.

Uhuru delivered a 53-seater bus, a promise he made before the August polls.

Revealed: Where Uhuru Kenyatta will be living after retirement

Uhuru Kenyatta was loved by many because of his friendly nature.
News
1 month ago

The former President has been keeping a low profile after he handed power to President William Ruto.
News
1 month ago
WATCH: For the latest videos on entertainment stories