• Kalonzo withdrew from the race through a letter dated September, 8th 2022.

• His name will not be appearing on the ballot. 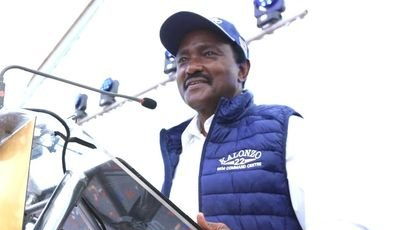 Kalonzo Musyoka. He has withdrawn his bid to vie for the Speaker of the Senate seat.
Image: Twitter

Wiper Party leader Kalonzo Musyoka will no longer be vying for the Senate Speaker seat.

The announcement was made by Senate clerk Jeremiah Nyegenye while reading out the names of all the seven candidates whose names had been fronted for the position.

According to Nyegenye, Kalonzo withdrew from the race via a letter dated September 8th,2022.

He however went ahead to notify the House that Kalonzo had, in a letter dated Thursday, September 8, pulled out of the race.

“A candidate may by written notice withdraw his or her candidature before the ballot is started. In this regard, I wish to draw the attention of the Senate to the fact that this morning, September 8, his excellency Stephen Musyoka withdrew his candidature for the position of Speaker of the Senate and his name will accordingly not be appearing in the ballot,” he said.

Following the clerk’s announcement, Senators allied to the Azimio La Umoja coalition walked out of the House, waving and blowing air kisses to their Kenya Kwanza Alliance counterparts.