Tallying began on Thursday, August 11, at the national tallying centre in Bomas

• Commotion has been witnessed at Bomas. 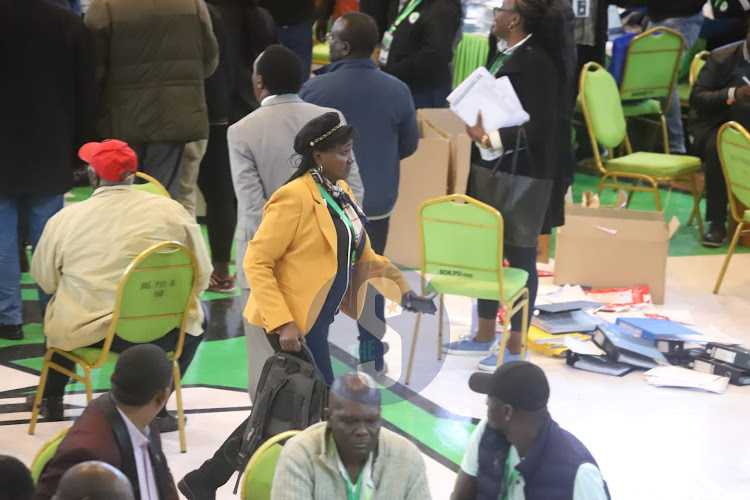 Gladys Shollei of Kenya Kwanza carries away a bag with a laptop said to have been sneaked at one of the tables at the national tallying centre at Bomas of Kenya on August 12, 2022
Image: ANDREW KASUKU

Commotion at the national tallying centre Bomas of Kenya has led to the release of tough new rules by the IEBC.

Late Friday, agents allied to both the UDA and Azimio caused anxiety at Bomas.

The drama began when a section of Azimio La Umoja leaders at Bomas questioned UDA’s Gladys Shollei who was supposedly carrying papers from one desk to another at the auditorium where the verification exercise of the presidential results was ongoing.

“Where is she going with the papers,” Homa Bay Governor elect Gladys Wanga was heard shouting.

Her colleagues Ruaraka MP TJ Kajwang and Roza Buyu joined in the protest leading to a commotion.

Explaining the incident, Shollei who was speaking on a local station said that the piece of paper she was holding was a schedule of agents who were due for a shift change.

“I was informing the security at the floor of the falling centre on who was going to replace the current agents when the time came so that they could get clearance from the gate,” she said.

“Excuse can we have some order? Can we have an audience with chief agents? Chief agents please,” shouted IEBC commissioner Abdi Guliye.

The scuffle prompted security officers to intervene. The auditorium was locked and entrances were guarded by officers drawn from General Service Unit (GSU).

"If you are an idler, keep away," Abdi Guliye, the commissioner in charge of operations, ordered that no one shall be allowed to access the auditorium if they are not part of the officials recognized by the commission.

To speed up the verification of results the IEBC only allows the following in the auditorium:

-The media and diplomats.

Kenyans on Tuesday, August 9, exercised their civic duty by voting for their preferred candidates from the presidency to members of the county ...
Politics
1 month ago

Martha Karua, the Azimio la Umoja running mate has urged Raila Odinga’s supporters to hang in there as IEBC continues to tally the votes.
Politics
1 month ago
WATCH: For the latest videos on entertainment stories