The deputy president was all alone at the second tier debate

• Ruto dismissed Raila's assertion that he could not face him because he is a man without integrity.

• Ruto claimed Raila has been part of the government since the March 9, 2018 handshake and is partly to blame for the various scandals that have rocked the government. 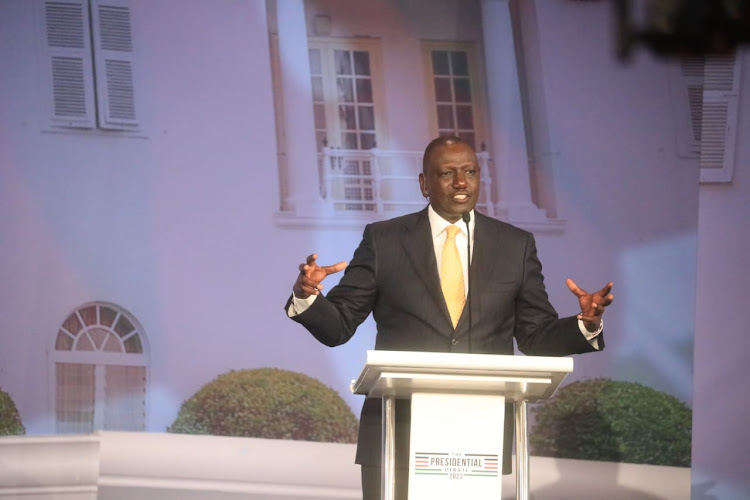 William Ruto, a presidential candidate for the UDA, claims that Raila Odinga, the leader of the Azimio la Umoja One Kenya coalition, skipped the presidential debate in order to avoid answering difficult questions.

Ruto rejected Raila's claim that he lacked integrity and hence could not face him. "Do you sincerely believe that that is the reason he is not here?" Ruto asked the moderators.

The audience laughed and cheered at this.

"My competitor is not here because he doesn't have a plan. He doesn't have an agenda. He cannot articulate anything to the people of Kenya," Ruto said.

He went on; "Secondly, my competitor is not here because he doesn't want to answer difficult questions."

Second, my rival isn't here because he doesn't want to respond to challenging questions, he continued.

Ruto asserted that Raila is responsible for some of the problems that have rocked the government since their handshake on March 9, 2018, and that he has been a member of the cabinet ever then.

As an example of something Raila did not want to be questioned about, he highlighted the KEMSA issue.

"In fact, my competitor is not here because he is not the real candidate. He is a project. So these are just scapegoats. He doesn't want to answer."